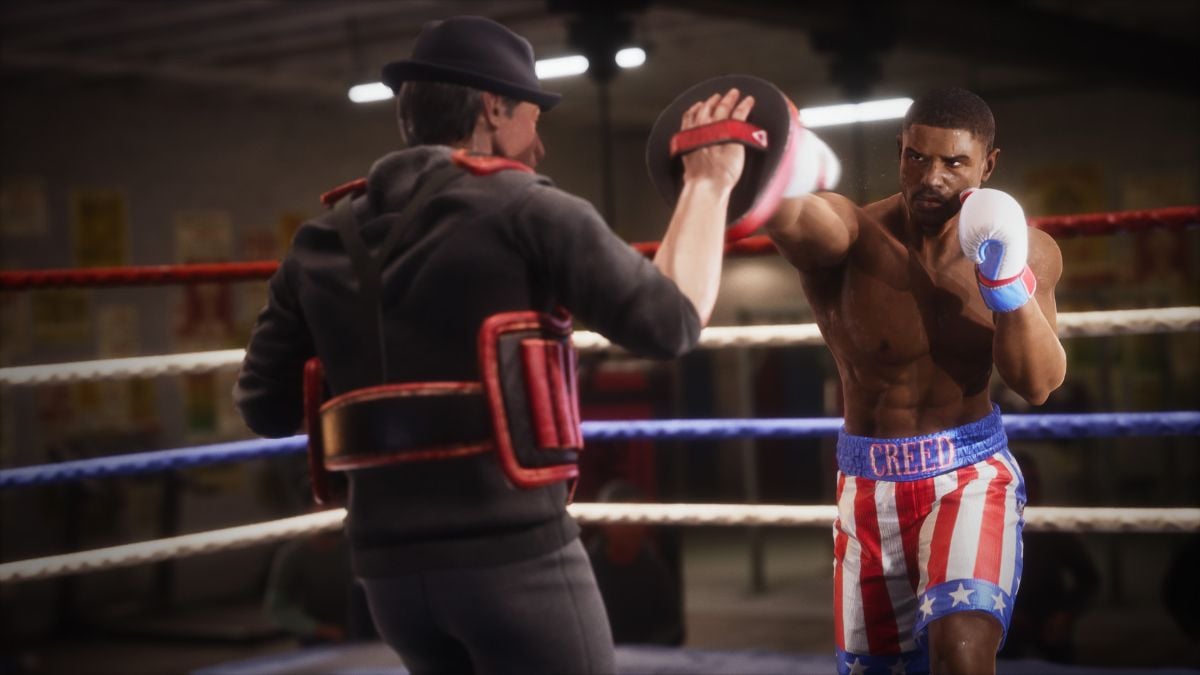 Boxing games are few and far between, so it’s a treat whenever we can play one on modern systems rather than going back to the likes of Fight Night and Ready 2 Rumble Boxing. The strange thing is that Big Rumble Boxing: Creed Champions tries to nestle itself between realism and cartoonish action, and I wish it chose either one. It does have merits, but I do wish developer Survios had more of an “Eye of the Tiger.”

Let’s start with the combat system, as that’s the most important element of a fighting game. The game plays like an arcade title with fast-paced action. You can block or counter incoming attacks, and you have two different types of strikes. The quick jab or the strong punch leaves you wide open. The main strategy is to combo both the jab and the strong punches to deal a lot of damage in one sweep. As you play with your preferred character, you’ll figure out their speed, range, and combo potential. There are also some simple combos you can do with your jabs, and the directional buttons correspond to different abilities. As you build damage against your opponent, you’ll gain a super meter, which if landed, can be a significant blow to the HP bar.

The boxing gameplay is fun and can result in some tense matches. The timing of the punches is essential to figure out, and trying to predict the opponent’s next attack can mean the difference between winning and losing — this game has this mechanic on point. There are three different types of boxers in Big Rumble Boxing: Creed Champions: the swarmer, general, and the slugger. You’ll see that many of the characters on the roster have similar abilities, and to be honest, it’s a disappointment, knowing the wide source material of the Rocky and Creed films the developer has to watch. Regardless, the combat is great in most parts, and the simplicity is part of the game’s charm.

The modes on offer are quite sparse. There isn’t an online component, but the main meat and potatoes are the arcade mode. Each character has a 40 minute to one-hour storyline that gives the player a reason why they’re fighting each opponent. Some of the writing is quite funny, but most of the time, it reads like the leftover Jalapeño in a Papa John’s order that never gets eaten. It’s not worth your time.

Big Rumble Boxing: Creed Champions has done a great job of representing characters from both the Rocky and Creed films in this game. Fans will love to play dream matches between Adonis and Rocky at their prime, and there are some neat callbacks like Ricky Conlan and Danny Wheeler. The environments are colorful and filled with personality with bright visuals. It also perfectly replicates the gyms, where Rocky and Adonis have trained in the past. The game even offers a lot of the music from the films in here, so you’ll be able to fight with “Eye of the Tiger” and “Gonna Fly Now” in the background. It also has some great RnB and Hip Hop tracks in the game.

The problem arises with some of the animations in the game. The super attacks, the most powerful moves in each boxer’s arsenal, are underwhelming with one to three underwhelming punches to the opponent. We have to take exception with Rocky’s brutal one-two strike that lays his rival on the floor face first; that looks brutal. I wish the game was more animated and inventive with each of the character’s moves like Ready 2 Rumble did. It felt toned back when it didn’t have to be. If the developers wanted to focus on realism, that wasn’t matched either. Each of the boxers looks squeaky clean during the fight with no scrapes, cuts, or blood on their faces. The developer Survios probably wanted to keep this game rated PG, but I would have liked to see the boxers worn down and showing some kind of fatigue in place of it.

Big Rumble Boxing: Creed Champions offers a fun boxing experience for those wanting something new to the genre. Survios is pulling its punches with the lack of online, and the game can sometimes feel cheaply made with dull arcade stories. But if you’re a fan of the franchise, you’ll love your time with Rocky’s most recent video game outing.

Disclosure: This review was written using a game code provided by the publisher.