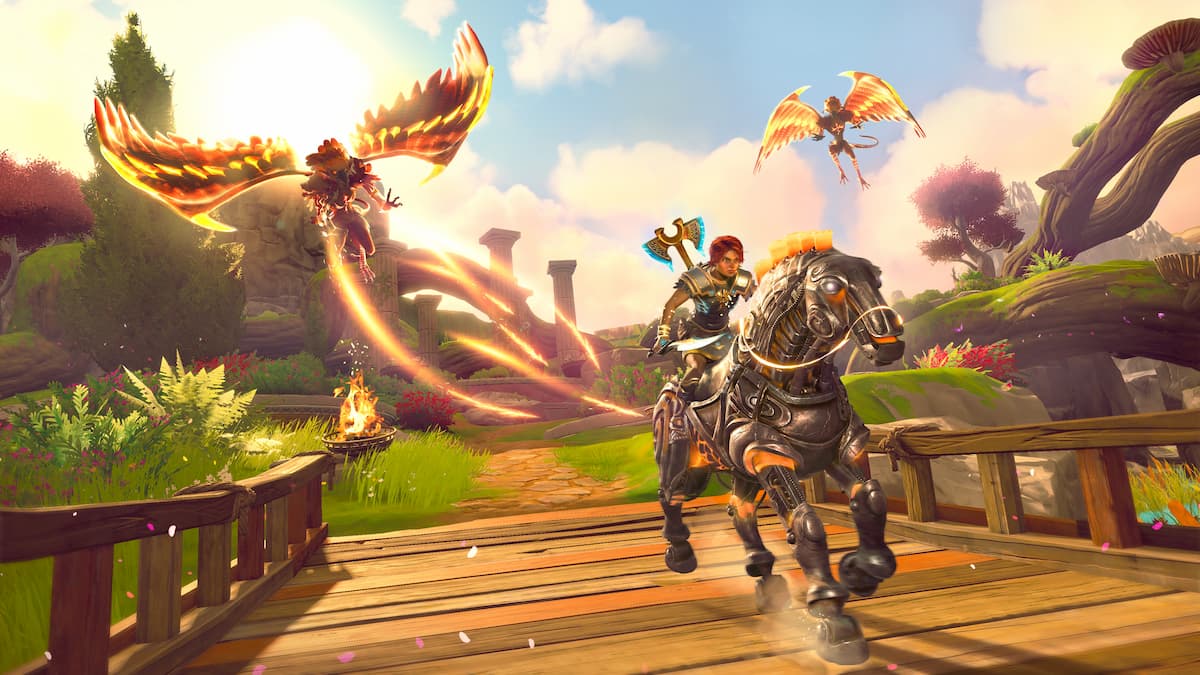 We loved Immortals Fenyx Rising when it was released late last year. The third-person action game from Ubisoft felt like a welcome breath of fresh air to the developer’s lineup of games, mining deep veins of comedy and cartoon action instead of the often stark and harsh themes of Ubisoft’s other games like Assassin’s Creed, Watch Dogs, and The Division.

With the A New God DLC, Ubisoft tried to bring more of the same puzzle-solving, relationship-building fun from the base game, and ultimately it managed to do a pretty solid job. Picking up directly after the end of the main story, A New God sees your character Fenyx trying to prove their worth to the gods they helped to save, hoping to join them in the Pantheon as a fellow deity.

To do this, you must overcome a series of trials and occasional tribulations to show that you have what it takes to become divine truly. The hours of world exploration are traded for a far more linear experience in the home of the gods, the Olympos. You travel from challenge to challenge, occasionally conversing with the gods, as you attempt to overcome whatever challenges they have in store for you to prove yourself.

A lot of the things you will see and do will be familiar from the primary campaign. There will be an abundance of puzzles for you to solve, moving blocks and boulders around complex environments. Hidden chests will tempt you into risky jumps, and there is plenty of combat waiting for people who enjoy the cut and thrust of Immortals Fenyx Rising’s action.

What stood out to us was when we were forced to combine skills in exciting ways simply to traverse levels. Chaining together jumps, dashes, Ares’ Wraths, and other skills felt great and provided us with a true traversal puzzle that didn’t have a default solution. You can also unlock new abilities and modifiers for the ones you already know, bringing a new way to think about the game. There are puzzle mechanics to learn, too, so everything is not entirely based on patterns you have already learned how to spot.

The downside is that the DLC is often too reliant on some of the iffier mechanics from the base game. Lining up flying boulders with Hapetheus’s Hammer is a bit of a chore, and it is something you will need to do a lot in some of the game’s puzzles. Players who struggled to enjoy that aspect of the base game will clash with some of the longer puzzles in this DLC.

The environments will also feel very familiar. Despite being in Olympos, much of the architecture will be very similar to areas like Aphrodite’s Palace, so don’t expect too many new sights and sounds to please your eyes and ears. The fact that you are not exploring the game world, the lack of overall story, and the general repetition of what you’re doing means that the DLC can feel a little long, and not in a good way.

The best way to think of A New God is as a hub that allows you to almost instantly jump into the next step in the tale, cutting out the world exploration in between. If part of the appeal of the base game was discovering interesting things and places, then that is sadly lacking here. That said, other players might see it as a welcome break from the base game’s long campaign, a way to jump back in and enjoy the mechanics without the fluff, so it’s very hard to condemn A New God for this design decision.

The easiest way to describe A New God is that people who fell in love with the base game will not find any reason to doubt their feelings here. The characters are still great, even without a deep story to move through. The puzzles are, for the most part, tightly designed experiences that will have you scratching your head without descending into frustration. And the action, while sparse, is still fun and frantic, even if your approach to godhood starts to render enemies a little bit obsolete.