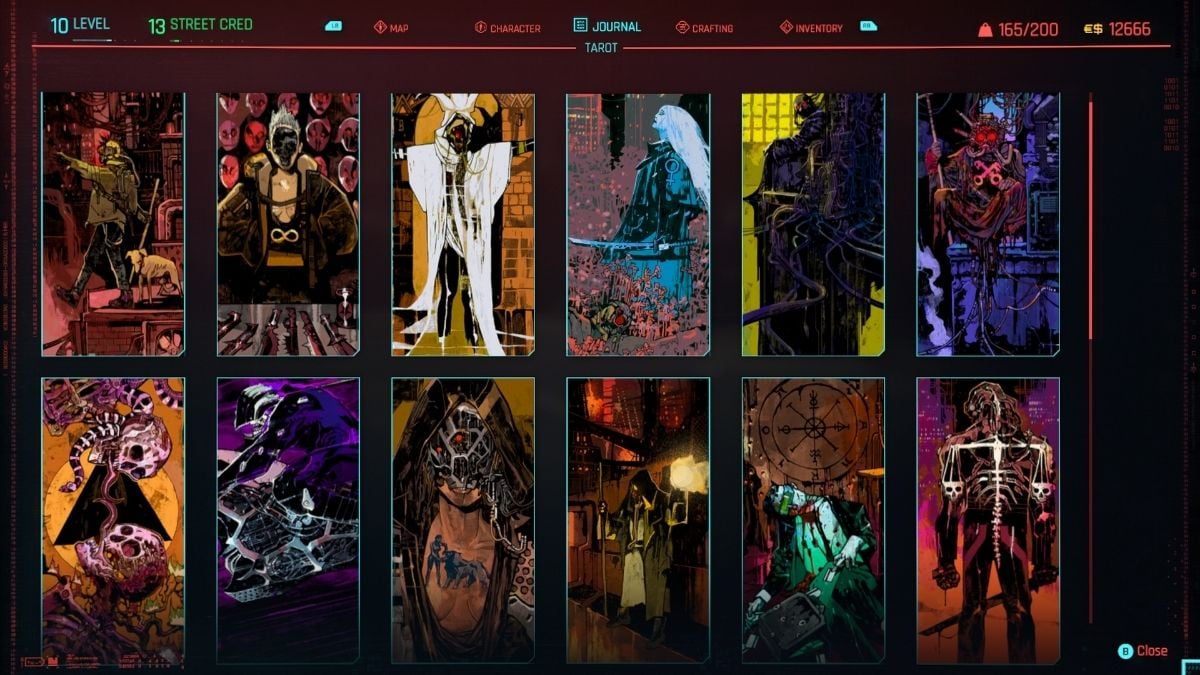 The world of Cyberpunk 2077 is dense and diverse, and like most open-world games, there’s a lot of collectibles to find. The 20 Tarot Cards scattered across Night City are one such item. They take the form of glitching-out murals on various walls across the city, and they will be shown on your map with a blue rectangle that looks like a card.

This collect-a-thon adventure linked to a side job called “Fool On The Hill” that’s finished after you have collected every single one of these cards and talked to Misty. This job also unlocks a rare achievement/trophy called “Wandering Fool.”

You can find this right outside V’s Apartment in Little China.

This one can be found outside the front of Lizzie’s Bar in Watson Kabuki.

This is on the fourth floor of an apartment in Vista Del Rey, Heywood. You may recognize this place from the mission “Search & Destroy.”

This one is at the bottom of the stairs, right next to the Afterlife Bar in Little China, Watson.

You can find this one outside the gates of Konpeki Plaza in the Arasaka Waterfront, Watson.

It’s right next to the start of the main mission where you meet Takumara in Japan Town.

You can find this behind the billboard in Silver Pixel Cloud, Westbrook. Enter code 0000 to gain entry into the area.

You can find this one next to Tom’s Diner in Little China, Watson.

This is in the compound where you first meet Panam in Rancho Coranado, Santa Domingo.

You can find this on the Voodoo Boy’s chapel in Coastview, Pacificia.

This can be a bit difficult to find as it’s outside of Night City. In the Badlands, find a Sunset Motel. The tarot mural is on the wall between apartment 103 and apartment 104.

You can find this on a tank, inside the compound of a power plant in Arroyo, Santo Domingo.

You can find this in the Norther Oilfields, which is in North of Watson district. The mural is on the top of a silo.

This can be found at The Glen in Heywood district. It’s sitting on the side of a building called Tall Embers.

This can be found on one of the walls along the Columbarium in North Oak, Westbrook district.

In Little China, Watson, around Misty’s location, take an elevator to the rooftop to find this mural.

You can find this around the construction site of Corpo Plaza, City Center.

This can be tricky to find if you haven’t explored the outskirts of Night City. You’ll find this mural at a radio tower, around the Solar panel farm.

You’ll find this on a wall, left of the Hanako Arasaka’s house in North Oak, Westbrook.

You can find this on the underpass in Little China, Watson.