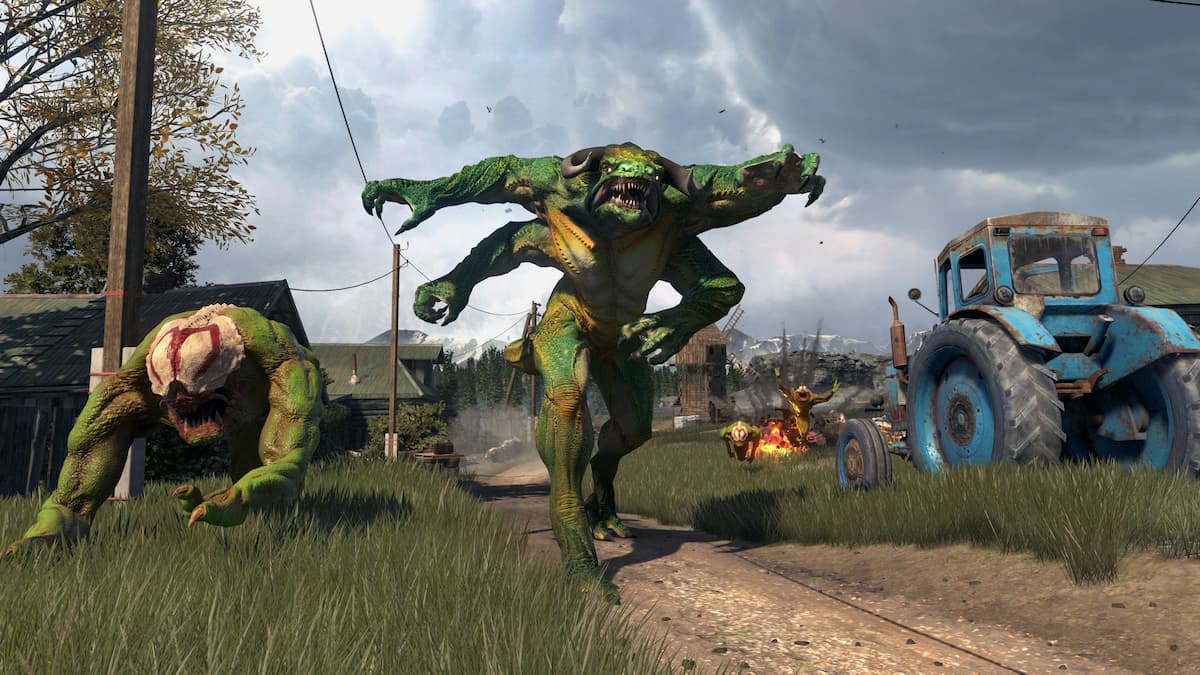 Rabid bulls, bipedal chicken dinosaurs, and brain-mounted AT-STs are just some of the enemies you’ll encounter in Serious Sam: Siberian Mayhem. Serious Sam is a series all about fighting off hordes of enemies with an huge arsenal of explosive weapons, but you need to know what the right tool for the job is, and that means knowing your enemy. There are a lot of enemies in the game, so we’ve sorted them into general categories for easier viewing. Here’s all the enemy types in Siberian Mayhem.

Gnaar and other similarly shaped enemies are not threatening on their own. They’re kind of slow, and they don’t hit hard. However, they are bulky enough to box Sam into a corner if you’re not careful. They usually appear in hordes alongside other, tougher enemies, so don’t skimp on the crowd control.

Octanians come in several different varieties. Some toss firebombs, some throw grenades, and some carry laser rifles or sniper rifles — but they all share one trait: they are easily dispatched with a single shot from most guns. They typically provide fire support on the battlefield for other, more dangerous opponents. The two exceptions to this rule are the Octanian Zealot and Legionaire, which resemble giant Spartans who will rush you while protecting their front, and the Octanian Commander, who will hide behind an energy shield while firing off a torrent of Sam-seeking missiles.

Kleer Skeletons, and their live counterpart Werebulls, are medium-sized enemies that you can typically hear before you see due to the thunderous stomping of their hooves. They will always attack Sam in a straight line, attempting to bull-rush you. Kleer Skeletons are slower than Werebulls but have a ranged attack in the form of a ball-and-chain to compensate.

Draconian Burners are a new enemy-type to Serious Sam. These giants carry twin thermal beams to sweep across the battlefield. They also have a jetpack, allowing them to attack from the air and move around quite easily. Heavy weaponry is recommended to take them down from a distance, as when they close the gap, they will attack with an AoE fire stomp.

The most common type of flying enemy will be the Combat Drone, which are easily defeated with a single shot from most weapons. Less common and much more irritating are the Witch-Brides and Haemovores, which are flying enemies that will phase in and out of existence, making them very difficult to attack. They usually pause for a second before attacking, so unload with your shotgun or crossbow to hit them before they phase away. In addition, there are Technopolyp Helicopters, which need to be defeated with heavy weapons such as Rockets or the Raygun — these will fire endless missiles at you that can burn through your health and armor very quickly.

Khnum become more common as the game progresses, and they are bipedal tanks. These enemies soak up bullets and rockets like it was nothing and can retaliate with fireballs that lock on to Sam. Their melee attacks and charges will take off a huge chunk of Sam’s health, so be ready to side-step. Bio-mechanoids are a little simpler to take down — bi-pedal walkers with giant brains, the secret to dealing with them is to shoot them in the mouth.