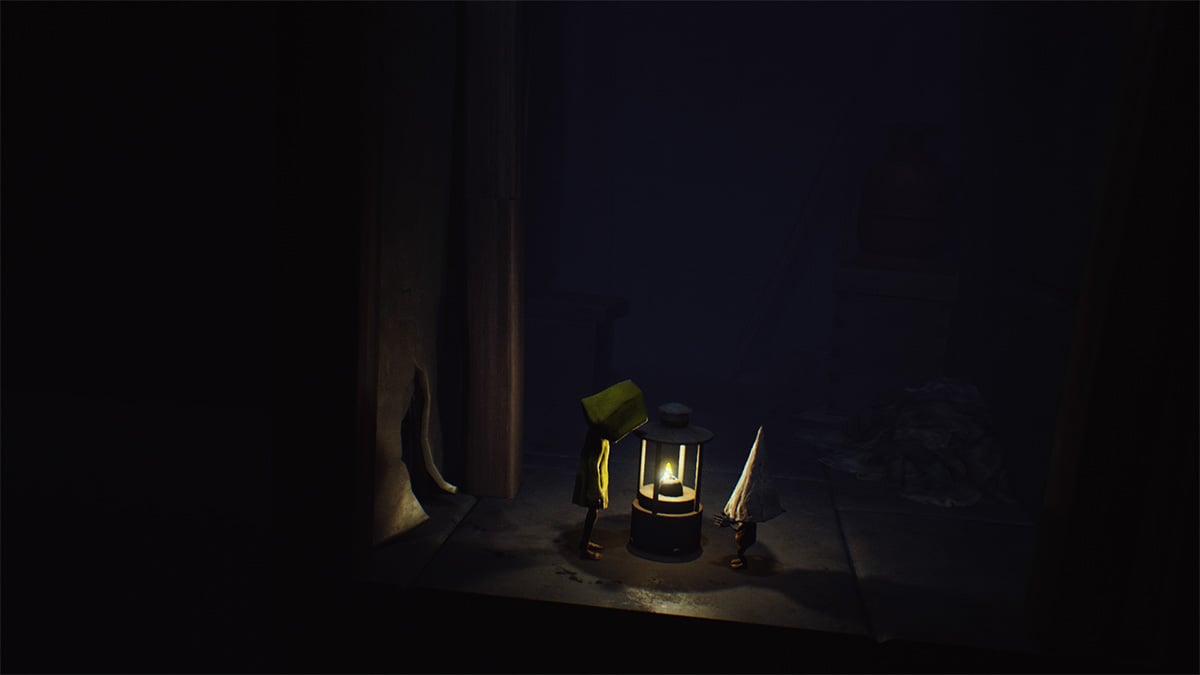 The Nomes in Little Nightmares are collectible creatures scattered throughout the game. In order to collect one, a player must run up and grab it, which results in a hug. It should be noted that Nomes generally run from the player at first, and the player may need to frighten the Nome (or otherwise interact with the scenery) to get them to show up in their proper place.

Now then — it’s time to get hugging all thirteen of these skittish creatures.

You’ll need to open the refrigerator to frighten this Nome, which will then move to the right into a small crevice. Chase it down and hug it, then enjoy the autosave from lighting the lantern in this small room.

Shortly after, you’ll cross a room where a spotlight-eye takes a prominent position in the scene, and the player will need to stay in the shadows while crossing the room. Just past this room is a stack of crates — the Nome is on the far right side of the crates. Climb up, then traverse right to drop down and give this guy a squeeze.

After you swing across a chasm, you’ll have a short filing cabinet puzzle to solve. One room to the left, and you’ll find this poor Nome huddled up in a cage. Light the lantern nearby, and yank the cage until it opens, sending the third Nome in a hurry one room to the right. You’ll find him huddled in a corner near the left door, in the right room.

In the starting area, you’ll have multiple stair sets with landings. Stop on the first landing, and enter the room to the right. Chase the Nome; after you solve the puzzle and the Nome escapes toward the stairs, head up one landing and it will be on the far left of the platform.

After you dodge the blind man, you’ll drop into a hole in the floor. Moving right, a lantern will be in the background while a clear path to the right is visible. Instead, move toward the ladder in the background on the right side, clamber up, and grab the fifth Nome.

After passing through the grandfather clocks, you’ll find yourself in a room with multiple towers of precariously stacked books. Head to the far right of the room, under the desk, to scare a Nome from hiding. Then move to the far left of the room, and give that terrified thing a chest bump.

After retrieving the key from the bedroom, go back over to the bathroom and find this little guy in the left corner. Maybe he tried the rat.

Rapid-fire Nome-ing: after finding Nome 7, you’ll head down the lift. Players will find a strange brown jar that is hopping about the room on the left, once exiting the lift. Pick the jar up and toss it about until it breaks, and give the dazed Nome inside a meaty bear-hug. As a fun fact, these are the closest two Nomes in Little Nightmares.

Within the sausage-making room, head under the table to find a Nome cowering in fear directly under the sausage grinder. Offer some comfort with a hug.

Note: This Nome is considered to be a part of the Guest Area chapter, but by the time you officially begin the chapter it will be too late to grab it. After escaping the Cooks, you’ll exit a porthole with a clear path to the right across a pipe. Instead, head to the left for a secret passage with a Nome and a lantern.

Technically the second Nome of the chapter, you’ll find this guy scurrying away from you as you enter the bar area. Don’t climb onto the table until after retrieving this Nome, because there’s no going back once the feeding begins.

After a bathroom incident with a Cook, you’ll take an elevator up a floor. The door to the right is wide open, but there’s the tiniest sliver of opportunity to the left. Sneak over and stop the Nome from waking the sleeping Guest with a squeeze.

The final Nome is impossible to miss, arriving just in the nick of time as our seemingly insatiable hunger begins to take hold once more.