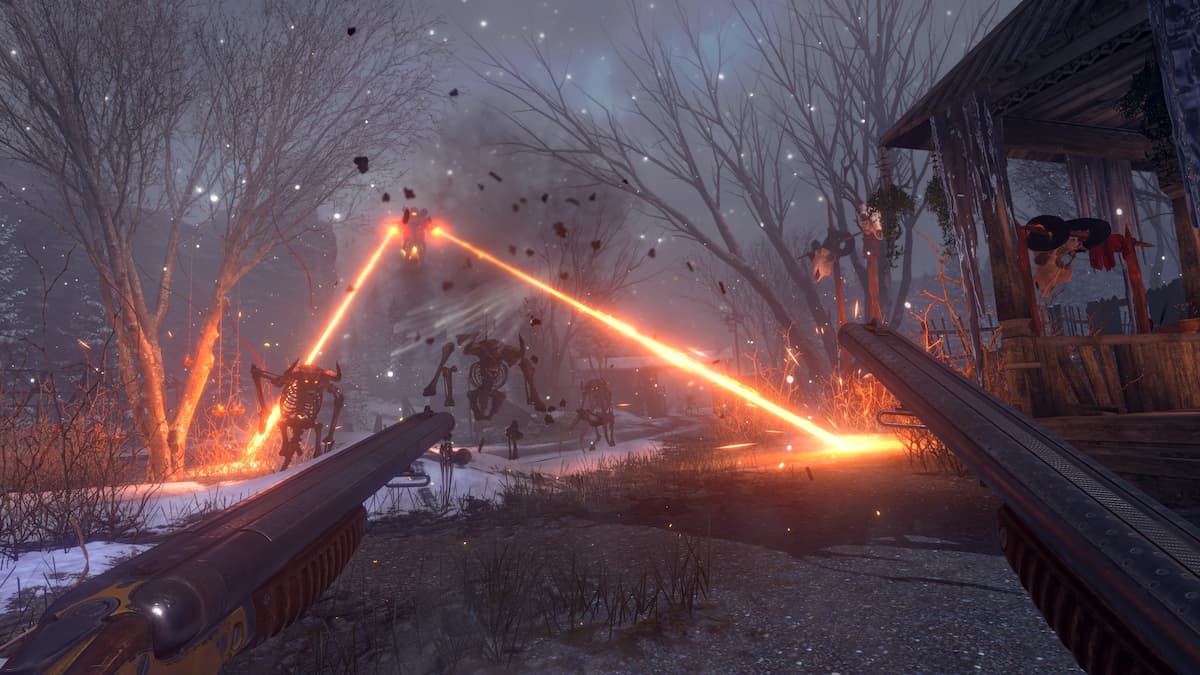 Serious Sam is a series that’s been around since 2001, and in every game since, Sam has had an entire arsenal of weapons to mow through enemies with. Siberian Mayhem is no different — with a whopping 13 different weapons to choose from, there’s no question that you’ll always have the right tool for the job at your disposal. Here’s a list of all weapons in Serious Sam: Siberian Mayhem.

The Knife is your standard melee attack. It’s very effective at dispatching singular enemies, and with the right skill investment, it can even be used to eliminate medium and larger enemies. However, Serious Sam regularly throws hordes of enemies at you, and you might find yourself swarmed to the point where melee attacks may not save you.

Ah, ol’ reliable. SOP38 is your starting weapon, and it comes with unlimited ammo to boot. Until you unlock the AK74, this will be your only weapon with enough range to pick off distant targets, but once you do unlock other options, you may find yourself not using this weapon much at all.

This bad boy will be one of your most effective weapons throughout the game, especially when you can dual-wield them. The shotguns in Serious Sam have some very stellar range and spread, so don’t be afraid to use it to pick off targets at a medium distance away from you. This weapon has a Grenade Launcher attachment, allowing your alt-fire to launch a grenade that deal AoE explosive damage.

The Coach Gun is your heavy hitter — up close, this monster deletes enemy health in only a few shots. It does cost two shells per shot, and has a very slow reload, so make sure you’re actually killing whatever you’re aiming at. Dual-wielding these can erase bosses in no time flat — as long as you can avoid their counterattacks.

Like the most well-known and reliable rifle in the real world, the AK-74MX is one of your main-stay weapons. This baby can shred enemies from just about any range, and is one of the most effective mid-range weapons, especially when dual-wielded. The spread gets wilder the further out you’re aiming, and you can’t carry a lot of ammo, so expect to dry up real quick if you’re spray-and-praying.

Love explosives? Then you’ll love the C-4. Your primary fire will toss a bundle at a set location, while your alt-fire will detonate all active bundles. C-4 is extremely handy for laying down some traps to clear out hordes of enemies — be careful, though, you can damage yourself in the explosion. These are also fairly hard to find, so use them wisely.

The Rocket Launcher is your medium enemy killer. Rockets can kill most medium enemies, such as Kleer Skeletons and Minor Bio-mechanoids, in one hit. The single-shot rockets do not track enemies; however, once you obtain the Multirocket weapon upgrade, you can load up to five rockets with your alt-fire. Once more than one rocket is loaded, you can lock on to enemies, firing off rockets that will seek and destroy.

The Crossbow is your sniping weapon of choice. This weapon is hitscan, meaning that if you click on a target at any range, you will damage it. The crossbow is very important, as it not only does fantastic boss damage when dual-wielded, but also eliminates most medium enemies in one hit (and most large enemies in a few hits.)

The Autoshotty is a hidden weapon, which can be found in Stage 3 underneath some boxes in a side-mission tunnel. However, it’s worth the trip as this weapon is one of, if not the, highest DPS weapons in the game. Ammo is extremely limited, making this a weapon to keep stocked for bosses.

The Raygun is another core weapon that you’ll find yourself using often. Although you first obtain it in Stage 4, its usefulness makes itself immediately known. Aside from dealing increasing damage the longer you keep the beam on target, the Raygun also makes a fantastic crowd-control weapon — waving the beam back and forth will instantly disintegrate most small enemies and most medium enemies after a second or two. The Raygun is especially useful when dual-wielded for bursting down Technopolyp Helicopters and Khnums as well as bosses.

The Grenade Launcher differs from your Pump Shotgun-mounted Launcher in a few ways — for one, the grenades launched from this do not explode on impact unless near a live target. This means that you can pepper the landscape with grenades that will sit, primed, until a target walks near them. The second difference is that, with the Cluster Grenade upgrade, these grenades will cover a wider radius and deal more damage.

This weapon is what Serious Sam is all about. By the time you pick up this baby, you should have the Heavy Weapon Dual-wield perk unlocked, which allows you to dual-wield two of these. 1000 max ammo count allows you just to hold primary fire and watch your targets splatter over your screen. Ammo is typically plentiful for this weapon, too, so don’t hold back — have a little fun with it.

Do you remember that scene in The Patriot where a cannon misfires and a cannonball is rolled down the battlefield, taking some dude’s leg off as it collides with the army? This weapon basically does that — it fires a slowish moving giant cannonball downrange, eliminating any small and medium enemy it connects with, while heavily damaging larger enemies. Ammo for this is very rare until Stage 5, but Stage 5 is basically nothing but Cannon ammo, so go nuts with it.