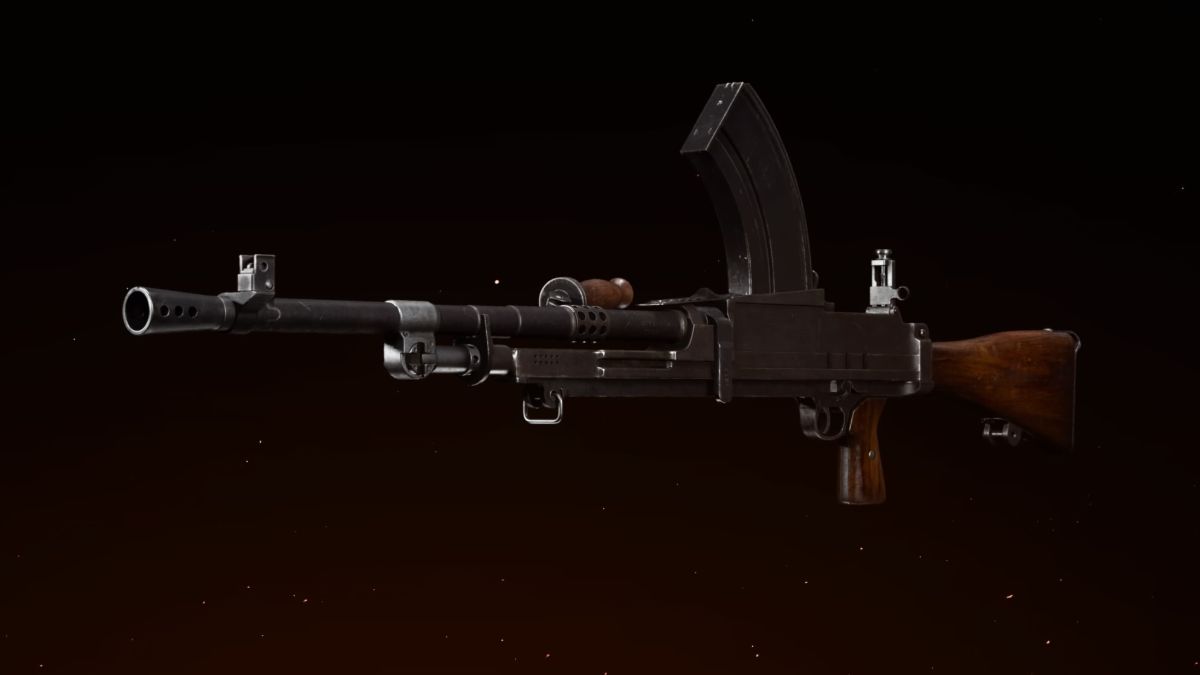 The Bren is an unwieldy monster on the battlefield, but this gun can be tamed with the right loadout in Call of Duty: Vanguard and Warzone Pacific. Keeping it to short bursts of fire with a precise aim is key to succeed with the Bren, and we’ll amplify this with our loadouts.

First up is the G28 Compensator. This is one of the best muzzles as it gives players more vertical (4.8%) and horizontal recoil control (1.2%), especially with a hard-to-control gun like this.

For the Bren, we want to focus on the high damage it can cause to medium to long-range targets rather than feverishly taking out close-range enemies. Therefore, the Queen’s 705MM Royal barrel should be equipped. With the barrel, the effective damage range has been increased by almost 300%, the bullet velocity rockets up by 40%, and the gun is far better at controlling its horizontal recoil (40%) and idle sway (52%). This comes at a cost of close-range functionality with significant decreases in sprint-to-fire time (-10%), aim down sights time (-10%), and hip-fire accuracy (-20%).

Additionally, the SVT-40 PU Scope 3-6X scope on the Bren can help you in mid-range to long-range combat. You can flip between 3.0 and 6.0x magnification levels while gaining some recoil control (4.8% for both vertical and horizontal) and accuracy (151.4% increase in idle sway control). It just comes at a cost of a lower aim down sights time (-3.9%). However, if you’re in a solid scoping position, as we envision you being in, the lower aim down sights time will not matter as much.

Improving the Bren even further, the Oak & Shield Padded Stock will provide even more dominance in accuracy. It provides a 5.9% increase in vertical recoil control, 2.2% boost to horizontal recoil control, 10% more centering speed, 83.3% more idle sway control, and most importantly a 20% increase in flinch resistance. During those firefights, you’ll need to be able to resist incoming fire as much as you can. This attachment once again reduces speed (movement speed by 4.0% and sprint to fire time by 9.1%), but moving around fast is not necessary with this LMG.

Furthermore, the Heavy Foregrip underbarrel gives even more stability to the Bren. It improves centering speed by 10% and idle sway control by 100%, making this a precise weapon. There are no cons attached, thankfully.

The number of bullets available is quite weak in the Bren, so we’ve opted to go for the .303 British 100 Round Drums. You can make tea and crumpets in the time it takes for this gun to fire 100 rounds. There is a drop in movement speed (-2.1%) and aim down sights time (-6.5%) once again alongside reload quickness (-3.8%), but the benefits outweigh the costs. You have 233.3% more magazine ammo capacity, 122.2% more starting ammo, and 66.7% more ammo capacity. You’ll have the optics locked in more rather than running around looking for more rounds.

For those sneaky soldiers hiding behind surfaces, you’ll need the FMJ Rounds as they cause more effective bullet penetration towards enemies and walls.

To bring back some speed to the weapon, the Fabric Grip will provide some minor bonuses to sprint to fire time (4.2%) and aim down sights time (3.9%) while losing some horizontal recoil control (-3.7%). You get the benefit of two increases for one slight decrease. The trade is worth it for a somewhat snappier response.

Although it holds better control, range, and mobility stats than most other LMGs, the Bren in Warzone surely isn’t as powerful nor as accurate as its Vanguard iteration. Thankfully, players can add a specific set of attachments that will erase these troubles and even turn it into a long-range problem for all enemies. Here are the weapon add-ons needed to make the best Bren class.

Our favorite part of this particular loadout is the idea of a 100 round magazine, with each bullet armed with literal fire power. This is all thanks to the .303 British 100 Round Drums and Incendiary ammo type — both unlockable fairly early when progressing the gun. With these applied, the Bren can cause fire damage even after your done laying in shots.

To make matters even worse for your enemies, the Bren is capable of shooting steadily while at any range. To witness this, apply several of the attachments that halt major recoil but also provide extra accuracy, such as the Heavy Foregrip, F8 Stabilizer, Brace weapon perk, Granular Grip, and the Queen’s Model 11 BH. Although this will certainly make you a threat from long-range, close to medium-range will also come as a breeze for the Bren.

With this type of diversity in range, there aren’t many scopes that allow you to switch to two completely different zooms like the 1913 Variable 4-8x optic. However, for those who dread going back and forth between zoom levels, we recommend the Type 97 5.0x Telescopic for a perfect middle ground.

When it comes to Bren-friendly class perks, it is highly advised that players use the Double Time for their first slot — which results in greater player speed while carrying the heavy LMG. With having such power from long-range, Bren users should also consider using more sniper-dedicated perks like Ghost and Combat Scout. Ghost is largely popular for allowing players to stay off UAVs and Heartbeat Sensors, while Combat Scout tags enemy positions for your teammates once they have been hit.