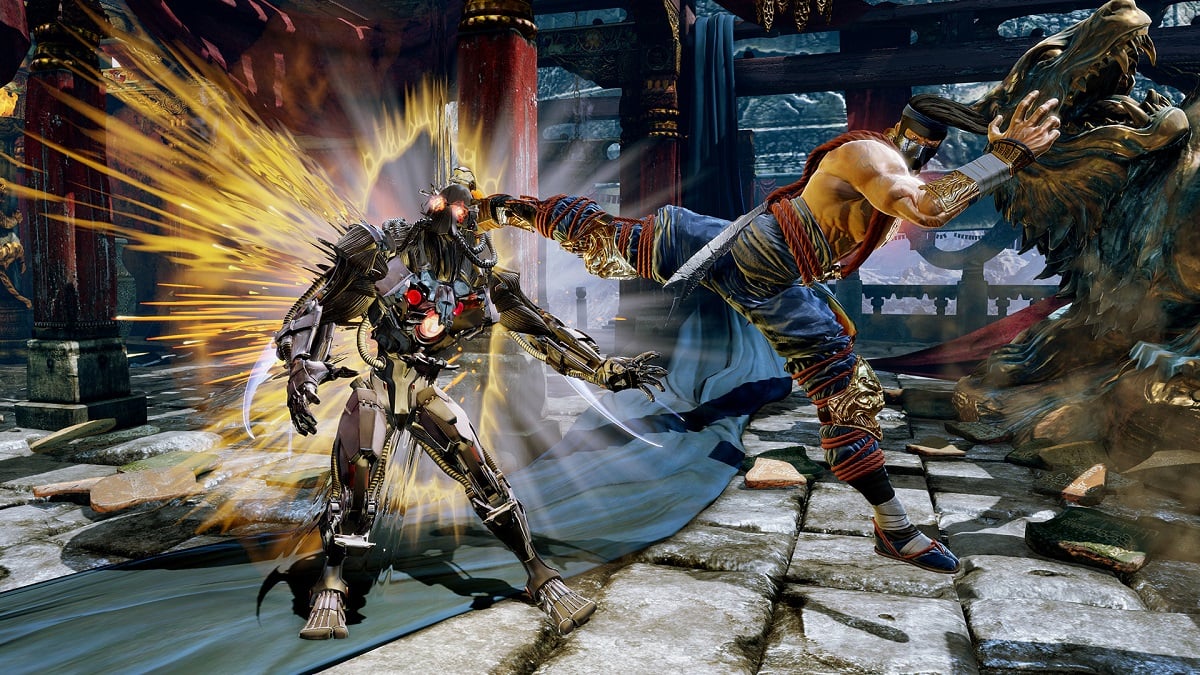 The instinct has crawled onto your Xbox and with such a wide variety of fighting games to choose from, you can keep yourself satisfied. From platform fighters to 2.5D brawls, here are the best fighting games on Xbox Series X/S and Xbox One, ranked from worst to best.

Just squeaking by on this list is Nickelodeon All-Star Brawl, a Smash Bros-like game that brings back all your favorite Nick characters. Aang from the Avatar: The Last Airbender series, Spongebob Squarepants, Danny Phantom, TMNT‘s Leonardo, and many more fan favorites come together to fight on various stages inspired by the shows we know and love. Those who like the physics of Super Smash Bros. Melee will likely be at home with this game. It’s fast-paced, has a range of exciting moves, and overall plays well on the Xbox family of consoles. It’s just too bad there isn’t any voice acting (at the time of writing) and lacks a bit of polish when compared to its competition from Nintendo.

The recent WWE games have been shaky as of late, but WWE 2K22 is a grand return to the wrestling experiences of old. Rather than a simulation-like system, WWE 2K22 has gone for a more mainstream combo system that is fun to pull off and easier to understand. Pulling off moves is entertaining to watch on-screen and the graphics have certainly improved since last time. MyGM mode is also an incredibly addicting element of WWE 2K22 as you manage your own show (Smackdown, RAW, NXT, etc) and recruit your favorite wrestlers.

This free-to-play platform fighter is easy to understand, and yet it’s thrilling to play every once in a while with friends. Many different roster members have appeared in Brawlhalla, from its cast of engaging original characters, WWE’s The Rock, Street Fighter’s Ryu and Sakura, Adventure Time’s Finn, and many more crossover competitors. In the game, you switch between two weapons and try to fling your opponent out of the arena just like in the Super Smash Bros. series. The formula works in Brawlhalla and is an easily accessible title for your Xbox system.

Capcom is the king of the fighting game genre, so even when it releases a disappointing title for the fans, like Marvel vs Capcom Infinite, it still succeeds with some tight 2v2 mechanics. While the visuals are ghastly from the mix of live-action-like graphics with cartoony characters, the game makes up for it with some outstanding combo play. The game’s frenetic and will keep you on your toes throughout the whole bout. Characters like Dante and Ultron zip through the stage with high-intensity moves, while Ryu and Megaman bust out some ranged attacks here and there. New characters like Black Panther and Captain Marvel also fit in with some stellar movesets. It’s a shame this game didn’t get off the ground, while its main competition Dragon Ball FighterZ crushed it.

On the Xbox One, Soul Calibur VI started a brave new stage of history with its intense, yet glorious visuals and gameplay mechanics. It brought back the characters fan know and love like Siegfried, Talim, and Nightmare, in addition to some third-party newcomers like Nier Automata’s 2B (which is DLC) and Geralt from The Witcher 3: Wild Hunt. This clash of swords and other celebrated weapons brings a rush of excitement as you try to outmaneuver your opponent. Catching someone slipping and sending your opponent backward or up in the air is super satisfying; you can also knock them out of the arena.

In addition to the excellent gameplay of Soul Calibur VI, there is an in-depth character creator system and the game lets you download others’ works, original or adapted from another movie, game, or other licensed property.

Continuing off the successful DC fighting game on PS3 and Xbox 360, Injustice 2 steps it up with an even grander story, more characters, and stunning visuals. Characters like the Teenage Mutant Ninja Turtles and Hellboy are fighting it out against well-known DC heroes and villains like Superman, Robin, Cyborg, Starfire, and Brainiac. Even lesser-known creations like Dr. Fate and Captain Cold have joined the battle.

Injustice 2 has a compelling battle system that lets you use each character’s abilities to their fullest and you can interact with the environment to either throw or bounce off large items. The combos you can pull off are exciting to figure out. One thing to keep in mind, however, is that the progression system to get new clothing options for the cast can be quite a grind.

Dragon Ball FighterZ is everything you want from a fighting game: an exuberant graphical style, top-class animation, exhilarating gameplay, pump-worthy music, and above all a marvelous set of characters to play as from across the Dragon Ball anime series. While it may have too many alterations of Goku in the game, it stands out for having a ranging roster. For example, less powerful heroes like Krillin, Yamcha, and Tien can face off against godly enemies like Broly, Hit, and Beerus in an ultimate battle. Each moveset is crafted to a tee as they launch mighty Kamehamehas and Big Bang Cannons towards their foes.

The 3v3 aspect is strong as well, with each character having a support move that can help in battle. The online might not be the best of the bunch, but the gameplay that lies within Dragon Ball FighterZ is nuanced and compelling enough to make up for it. It’s also exciting to watch in the eSports scene as combos can last well into the double digits.

One of the most electrifying fighting games to grace us in the past decade is Killer Instinct. It scales up the action with enthralling combos, in-depth characters, and crossplay between Xbox and PC players. The battle is always intense as your opponent can cause a combo breaker at any time, leaving you open for attack. The game also features some characters from Rare and Xbox history. For example, Rash from Battletoads appears as a playable fighter alongside Gears of War’s villainous General Raam and Halo’s Arbiter.

The moves you can work into your combo are exciting to watch, and the online experience is actually decent for a game from 2014. This is a fighting game that Xbox fans can be proud of and if you haven’t tried it already, you can play it for free with a limited roster.

Mortal Kombat 11 triumphs as one of the best fighting games on Xbox systems, and is also one of the bloodiest. The developer Netherealm Studios doesn’t pull any punches as spines are ripped out, bodies are inflamed, and people are split in half in intense graphical detail. It adds to the stakes of each battle as you use each character’s special moves and combos to triumph over the other.

Mortal Kombat 11 also has a deeply involved storyline that will keep you hooked from beginning to end. The transition between cutscene and gameplay is almost seamless. In addition, MK11 has rollback netcode and crossplay with PlayStation users, allowing for a smoother online experience than most other fighting game titles.

Tekken 7 is arguably the best fighting game on Xbox right now. Each punch and kick displayed in the game feels crunchy and powerful as you lay waste to your opponents. Every character provides their own fighting style and personality to the 51-person roster, making them all feel welcome in the game. Elisa provides an energetic fighting style with mech-based weapons and agility. Meanwhile, King is more of a grappler as he’s inspired by the art of wrestling. To help you learn each character’s moveset, there’s a useful tutorial mode that shows you how each combo and move is performed.

While the online gameplay can be hit or miss with its connectivity, there’s a decent story mode attached to Tekken 7. It’s not as effective as Mortal Kombat 11, but it does provide some entertaining blockbuster-style battles. Street Fighter fans may appreciate Akuma, one of the best characters in Tekken 7, playing a vital part in the story too. Tekken 7 is still a stunning game to this day with stellar particle effects and some pulse-pounding slow-motion moments at the end of each fight.