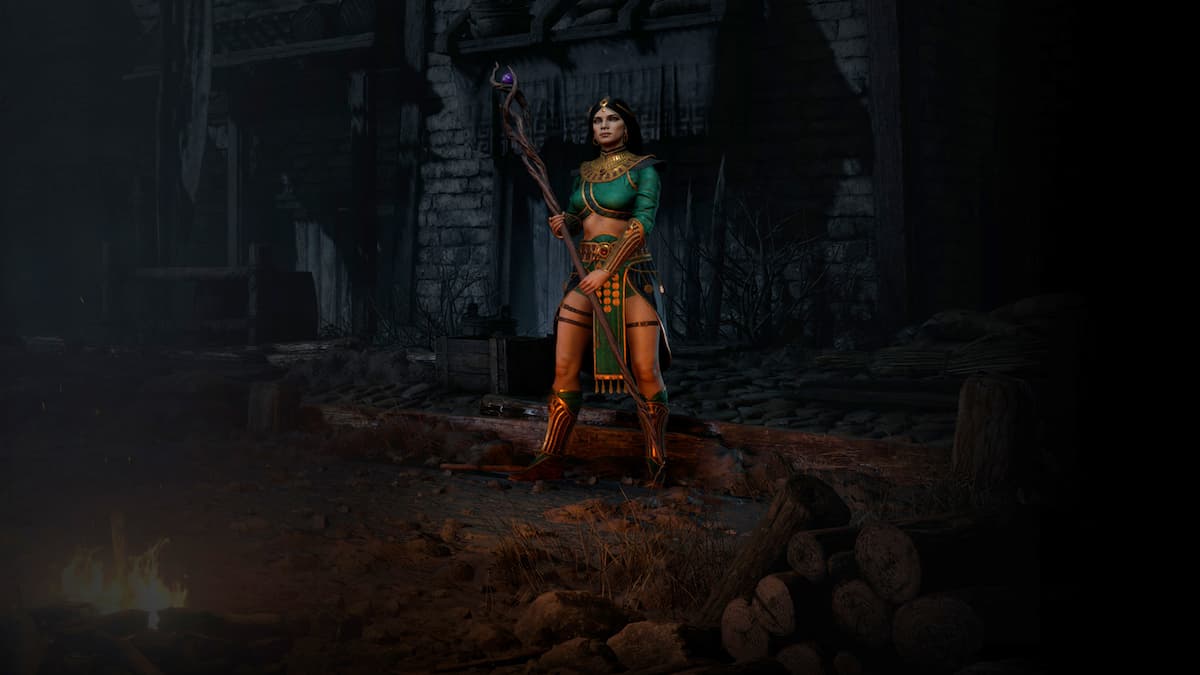 Diablo 2: Resurrected lets players hop into one of seven different classes to take on Diablo’s forces. One of them is the mighty Sorceress, who uses the elements to destroy the minions of Hell from afar. Her ability to attack from range can be devastating in both PVE and PVP combat. If all you want to do is blow people up, she’s an excellent class to use.

The Sorceress has control over fire, cold, and lightning. In our opinion, you want to stick with either a fire or ice build. Lightning is viable, but the other two elements are stronger in our experience. Finally, both the Fire Meteorb and Frozen Orb builds are incredibly strong, but they require quite a bit of practice. For that reason, we’re skipping them in favor of builds that are much friendlier for beginners.

As far as stat allocation, you want to put minimal points into Dexterity, Energy, and Strength. Essentially, just put in what you need to use your equipment. The one change for PVP is that you may want more Dex to get a higher block. That said, the bulk of your points should go into Vitality to help keep you alive.

In terms of gear, you have several options available. This build isn’t as gear-dependent as some others, but you do have some things you probably want to target. For example, getting The Oculus as your weapon and the Chains of Honor rune word in your armor slot can help out quite a bit. You also want to have either Stormshield or the Spirit rune word as your shield.

As you can see, this build is very focused on fire damage, which can be a problem when you come up against fire-resistant enemies. There are a few ways players deal with this, but we’ve gone with putting points into Blizzard. Other players will spend those points by spreading them around Static Field, Warth, Fire Wall, or Energy Shield, among others. Feel free to play around with it to find what works for you.

The Blizzard Sorceress is interesting because there are a few ways to play with them. You can either do what we’ve done here and go entirely into cold spells to maximize damage. The issue is that you don’t really have a way to deal with cold immune enemies in higher difficulties. So, you need a friend or hireling to help you out. Otherwise, you can take points out of Frost Nova and Cold Mastery and put them into a spell from another tree and its mastery. A good example here would be Fire Wall and Fire Mastery as Fire Wall doesn’t require many synergies to make it powerful.

That said, the Blizzard build is deadly in most situations. For stats, you can basically copy and paste would we said about the Fire Ball build. Max out that Vitality and keep everything else to a minimum. For gear, you can look at some of the standouts we mentioned above while also looking for items like Death’s Fathom and Snowclash due to their cold skill boosts. Plus, anything that takes down enemies’ cold resistances is key.

Most of your damage is going to come from Blizzard, but it’s relatively slow in dealing damage. If you need a “get out” button, make sure to use Glacial Spike. It’ll help you quickly clear a path to escape from certain death.

Either of these builds will work well at most levels of play. If you’re interested in taking another step in complexity, we’d recommend looking into either the Meteorb or Frozen Orb builds. Those two are very destructive, but they also require a bit more technical skill because of how the main skills work.