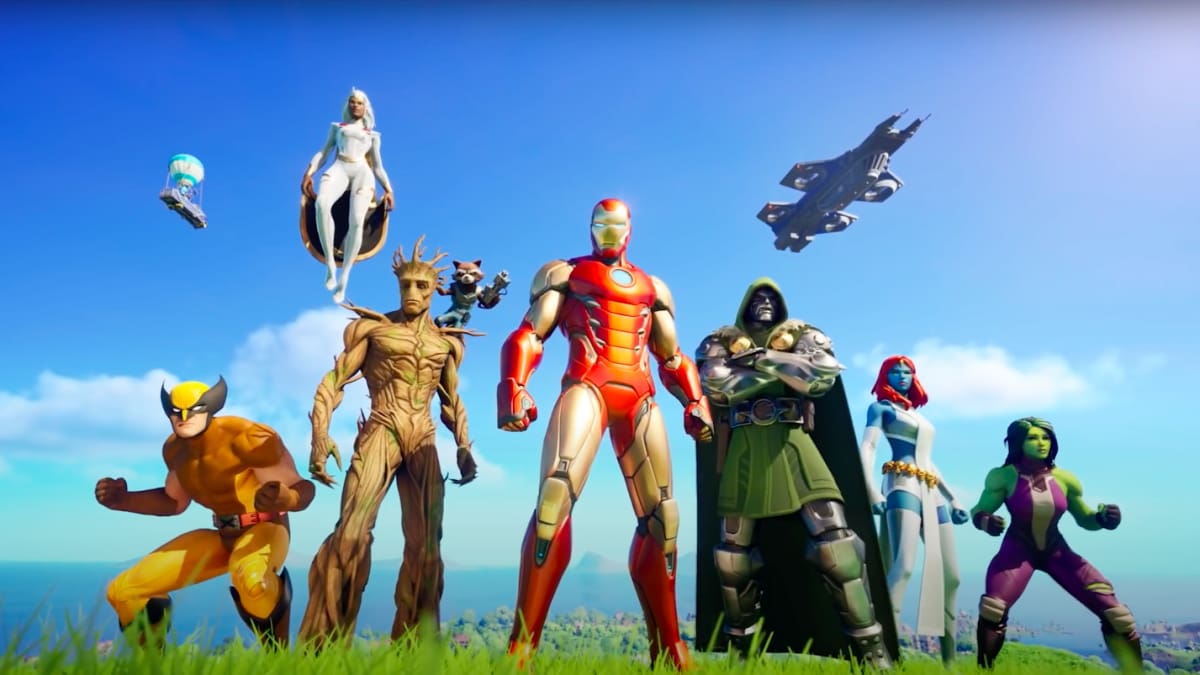 Considering Fortnite has introduced truckloads of big-name superheroes from both the DC and Marvel lore, it is easy to be overwhelmed when hunting down which to add to your collection. However, breaking down the best of the bunch doesn’t equate to a popular contest; rather, it is all about which heroes have the most unique and outstanding styles to choose from. That being said, there are just 10 superheroes that surely rise above the rest.

Near the end of Chapter 2 Season 6, there were a slew of Batman skins that hit the market for a short time. Out of the handful, the very best was the Batman Zero skin, as it displayed a more primitive version of the caped crusader. This iteration was first introduced in May 2021 at the cost of 1,500 V-Bucks and has surprisingly appeared in the shop 55 times since its debut.

Quite honestly, Clark Kent’s Shadow Superman style may be the greatest superhero skin of them all, but naturally, it is the toughest to obtain. First and foremost, upon his arrival in Chapter 2 Season 7’s Battle Pass, players would initially have to unlock the style by doing a mind-boggling 84 quests for the character. As you’d have to be truly dedicated to the game to pull this off, those who use this style nowadays undoubtedly install fear into any opponent going against them — and its all-black look certainly adds to that.

Since the season ended, Clark Kent and his three alternative styles still haven’t been placed into the Item Shop. With Superman being one of DC’s most popular creations, it is almost certain the character will be costing you a few thousand V-Bucks down the road.

The adorable but deadly Cuddlepool is perfect for any hardcore fan of both the battle royale and Marvel. Of course, the actual Deadpool skin deserves an honorable mention, but the originality within Cuddlepool’s design is well worth 1,500 V-Bucks. Thankfully, the skin has been available in the Item Shop over 60 times since its debut in Chapter 2 Season 2, making it likely potential buyers will have plenty of chances to obtain it in 2022.

For those wise enough to buy the Chapter 2 Season 4 Battle Pass, the seemingly harmless Jennifer Walters and her challenges were possible to have just by getting to Tier 22. However, by completing her quests, players could obtain the Gamma Overload emote, ultimately turning Walters into the almighty She-Hulk for an entire match. Since the season ended, Jennifer Walters and her alter ego have yet to appear in the Item Shop, but it would come as no shock if they are up for purchase at some point in the near future.

Although a majority of superhero skins have stellar alternative styles, what if players had the power to create their own? Well, this ability is certainly possible for those who own a hero from the Boundless set, a collection that debuted in September 2020. Out of the 11 skins within it, Joltara has earned our attention the most, with her spooky white eyes and fire-red hair. However, if you aren’t a fan of her suit, you can alter it with the 24 different color options, as well as with the four suit material choices.

This level of customization is incredibly rare, but her appearances in the Item Shop are another story. Since arriving in Chapter 2 Season 4, Joltara and the rest of the Boundless cast have been available in the shop over 21 times and have never been absent from it for more than two months at a time.

Despite having several variants in the battle royale, Harley Quinn’s phenomenal red and black Rebirth outfit is sleek, yet threatening to any enemy that spots it. This version of the supervillain was first introduced in Chapter 2 Season 6’s Item Shop for 1,200 V-Bucks but has yet to return since. Regardless, the skin can still be obtained for free if players purchase a physical copy of the Batman/Fortnite: Zero Point Issue 1 comic.

As the newest skin of the bunch, fans were overjoyed when Epic Games finally decided to stop withholding Marvel’s debatably most popular face: Spider-Man. Along with his four alternative styles, Spider-Man first arrived alongside the introduction of Chapter 3 Season 1 in December 2021, and could only be used once Page 9 of the Battle Pass was completed.

The web-head has yet to be featured in the shop, but his No Way Home iteration was for a short time last December. As most film-inspired skins only appear when their franchise needs to be promoted, Tom Holland’s Spider-Man is likely to be up for purchase once more when Spider-Man: No Way Home lands on Blu-Ray and DVD in the summer of 2022.

One of the rarer superhero skins to own in Fortnite is, without question, Storm. This member of the X-Men debuted as part of the Chapter 2 Season 4 Battle Pass and could be obtained at Level 53. Her extremely high value primarily comes from her challenges allowing users to unlock her Epic Holo Foil style, an outfit that dawned several dazzling colors. Unfortunately, the style and the base character have yet to arrive in the Item Shop since the season ended.

If you’re a fan of rocking one character’s entire dedicated set in matches, there may not be one more unique than Venom’s. Rather than simply grabbing the harvest tool from his back bling like most characters, Venom will morph one of his limbs into the Symbiote Slasher pickaxe — ultimately ensuring that the 2,000 V-Bucks spent on the skin was no mistake. Like Spider-Man, Venom is known for being in the shop mainly when his movie franchise is in the spotlight. However, as he has been in the daily rotation numerous times since November 2020, players are bound to see him again soon.

Thanks to challenges in the Chapter 2 Season 4 Battle Pass, players could nab the Holo Foil Wolverine skin, a style that arms the X-Men member with an all-metallic version of his classic suit. Wearing this also causes Wolverine’s Adamantium Claws to change in color, resulting in a gorgeous green and gold design. However, like Storm and her Holo Foil style, this outfit has remained exclusive to its Battle Pass.