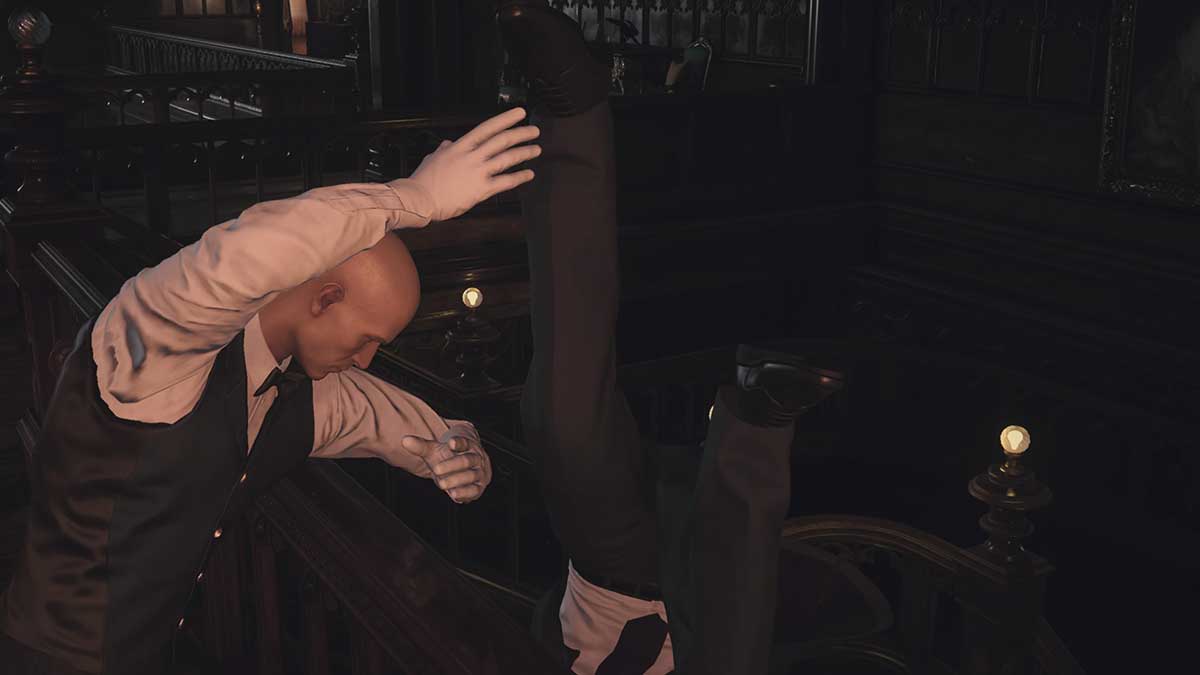 Free the Stairs! is a Featured Contract in Hitman 3 that tasks Agent 47 with assassinating three guards near the three main staircases in the Dartmoor location. While it might seem easy to start with, this mission can be incredibly tricky without a guide, which is why we’ve put this one together to help you get through it with a rank of Silent Assassin.

The only item that’s essential in your loadout is the Coin. We’ve brought the Goldballer silenced pistol and Guru’s Emetic Grenade because they provide a few more options, but you may wish to bring your own favorites for any sticky situations. Using the starting location in the library allows you to start with a disguise that makes this mission easy, but you could also start from the main road and acquire the disguise along the way for a purist run.

Step 1: Clear interference and get your first kill

Once you’re inside the manor, it’s best to find the two targets standing at the top of the main stairs to the upper walkway. One on each side with an NPC in the same room patrolling the balcony and one patrolling the corridor behind them. To make your life easier, subdue the guard in the corridor and hide his body in the wardrobe so there’s no chance that he’ll spot you.

The easiest way to kill one of these targets is to flip a coin towards the railing above the stairs. This will draw the guard over, and then you can push them over the edge. Make sure that the guard patrolling in the same room can’t see you, or you’ll find yourself in combat. Alexa Carlisle will also patrol the area at some point, so look out for her as she walks around.

It doesn’t matter which target you start with, but you should leave the area and head left to the target on the floor above soon after. This is because guards will start looking around for a killer around that first body, making killing a second target straight away more challenging.

The target on the floor above is also standing near an edge where you can flip a coin to draw them to it and push them over. If the distraction doesn’t draw them close enough to the edge, you can knock them out and dump their body over it to kill them. The kill will still count as an accident, which means you’ll retain the Silent Assassin rating.

Step 3: Back to the stairs for your final kill

The final target is back where your first one was. They’ll be on the opposite side of the walkway. You should be able to use any item to distract them to the edge of the stairs and throw them over too. However, the patrolling NPC in this room can make things difficult. It might be easier to draw them into the corridor behind them and drop a chandelier on their head with the silenced pistol. Alternatively, you could kill them and hide their body in the wardrobe in this corridor. When in doubt, you could also poison them. If you find yourself struggling, try to use the method that you find easiest to get this final kill if pushing the target over the ledge doesn’t work for you.

When this final target has been killed, you can use any exit to escape. The safest way to leave is by heading to the bathroom, vaulting out the window, sliding down to the ground, and walking away.