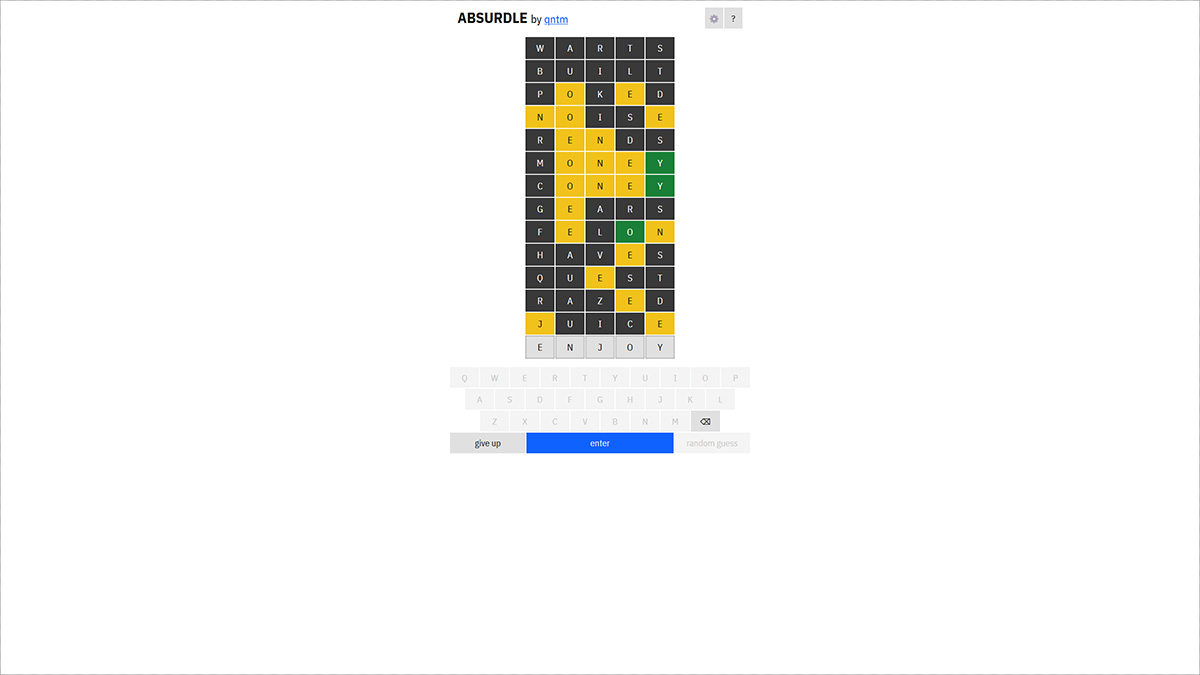 If you have been playing Wordle without breaking your streak, and would like to pursue a greater challenge, you can try playing Absurdle. This is yet another word game; however, this one actively tries to hinder your progress in guessing the word.

While both games have similarities, Absurdle is different in that you have unlimited guesses, and you can play as many games as you want. However, Absurdle will also try to actively hinder your progress by giving you as few hints as possible. The goal is to narrow down the possibilities for Absurdle until only one word fits the right category.

Where can I play Absurdle?

How do you play Absurdle?

Absurdle is played similarly to Wordle, in that you can guess a five-letter word and the game will tell you what letters are in the solution as well as the correct position (green), which letters are in the solution but in the wrong position (yellow), and letters that are not in the word at all (black/grey). They also use similar word lists, which means Absurdle doesn’t throw words at you that you wouldn’t find in Wordle.

The big difference is that in Wordle, the secret word has already been decided. If the secret word was “HAIRY”, that word doesn’t change regardless of how many guesses you make, or if you return to play the game at a later time.

In Absurdle, the secret word hasn’t been decided yet. Your guesses will shape what the secret word is, as it will take the largest number of words that fit in a “word bucket” based on your recent guess as well as the information it has given you.

The “word bucket” is a list of possible words that fit the hints provided, and could potentially be the solution.

As more guesses narrow down the possibilities, Absurdle will work with increasingly smaller “word buckets” until there is only one possible answer after all of the inputs. It will play fair (it will deliver hints exactly as Wordle does, and it will only use actual words), but it will actively work against you until there is no other option.

Basically, you are trying to “corner” Absurdle into accepting your solution because it is the only word that fits those requirements.

Here is an example game with some guesses already made to demonstrate Absurdle’s concept.

In this game, the first guess was the word “QUACK”. In a game of Wordle, that would tell you that the word doesn’t include the letters Q, U, A, C, or K. You would then guess another combination of letters to find more clues for the word. The secret word in Wordle hasn’t changed since you began.

In Absurdle, the game has taken out all the words with the letters Q, U, A, C, and K. The largest “word bucket” now contains words that do not have any of the five previously guessed letters.

The third guess was “BORED”. The clues are that the letters O and E are in the right position, but the letter R is in the wrong position. Absurdle now has a smaller “word bucket” where the letters B and D have been removed, and the words in the “bucket” now have O as the second letter, E as the fourth letter, and R is in the word, but not as the third letter.

Here are more guesses to demonstrate the process:

The fourth word was “FERAL”. The only hints obtained here are that the letters F, A, and L are not included, and Absurdle has removed any words from the “word bucket” that contained those three letters.

The fifth word was “MOVER” and the sixth word was “POWER”. Absurdle has continued to stall as more letter combinations have been guessed, though the letter R is now confirmed to be in the last position. More letters are being eliminated, but there are still a few words where O is the second letter, E is the fourth letter, and R is the final letter.

The seventh word was “GONER”. Absurdle has still taken the largest “word bucket” it can find, but it is now getting smaller. The positions of the letters O, E, and R are confirmed, and the letter G is likely the third letter given that it is in the wrong position, but all other letters are known.

To demonstrate how tricky Absurdle can be, an insightful reader might note that with the remaining letters, there are no words starting with either Z, X, Y, or J that fit with the letter combination _OGER. However, Absurdle is still insisting that the game can be beaten.

A few random guesses have been made to simulate frustration (by selecting the random guess option), as well as a deliberate word choice to confirm the position of the letter G. Absurdle has been great at withholding the last letter, but it has conveniently left out the fact that some letters can be used twice. The “word bucket” can contain words with the letter used twice and is a great example of Absurdle trying to withhold the answer from you.

The answer to this Absurdle is “ROGER”. It has been “cornered” into this word, as no other words fit into the clues given while keeping the original condition of being a real word.

Give Absurdle a try

Absurdle is a fun way to challenge yourself by competing against a word game that tries to be vague. It should be noted that you want to play different words every time; if you copy the exact responses from a previous game, it will end up being the same game.

But for players who are interested in another word game to sharpen their Wordle skills, you can’t go wrong with Absurdle.