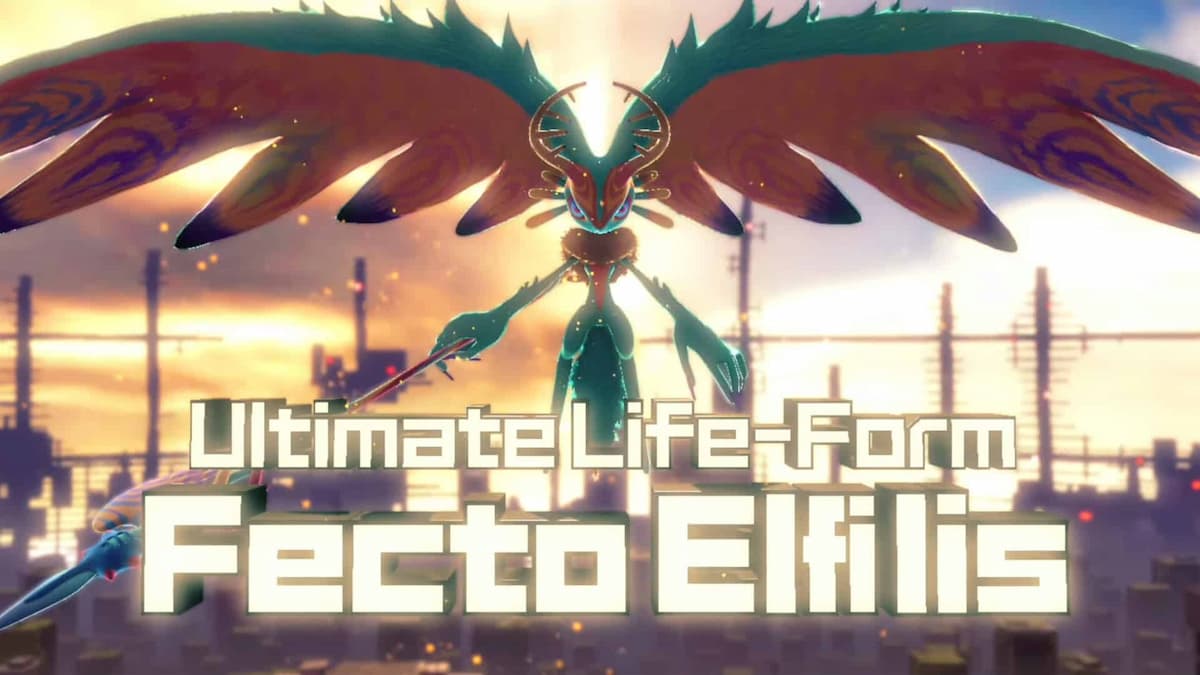 Kirby and the Forgotten Land will bring about plenty of boss fights and trials for you to overcome. After saving King Dedede and fighting King Leongar, you will find out that your companion on this quest, Elfilin, is actually a part of the game’s true antagonist, Fecto Elfilis. This being can create rifts in space and has been mind-controlling your enemies to help restore them to their former powerful selves. Here is how to beat the final boss of the main story, Ultimate Life-Form Fecto Elfilis.

Before you climb the building to take on Fecto Elfilis, be sure to use the Maxim Tomato to heal yourself and grab whatever copy ability you are most comfortable with. In our case, we prefer fire because of the damage over time, but there are ways that the boss negates that lasting damage. Just use whatever you like the most. There are various parts of this fight that are similar to past boss fights, so some of the same methods apply here.

When the fight begins, Fecto Elfilis will fly far away so you can not hit them. They will start sending energy blades towards you, so run left and right to avoid them. After a couple of bursts, they will charge the ground where you are standing, so keep moving and hit them a couple of times while they’re stuck. When they pull their weapon out, they may do quick charges at you that you can avoid while running to the side and jumping or dodging. Be ready for a sideswipe that you need to jump over after a couple of them.

If you see them on the ground and they hold their spear straight up, it means they are charging a close-range version of the energy blade attack. Just move sideways again to avoid these while hitting them in between bursts. After the first time they hold their spear up, they will do it again, but this time they are creating a rift to slam into the ground to make some shockwaves come out. Jump over the rings and hit them while they are stationary.

If Fecto flies away and begins charging up an attack, be ready to run sideways from an incoming beam that lasts a while. If you get hit, you will be trapped inside and take a lot of damage, so do all you can to avoid it.

Another attack they may perform while in the sky is a charge at you three times with their spear glowing red, so either dodge or slide to the side before they come in. Be sure not to touch the ground where they passed through, or you will be hurt. After the third charge, run up and hit them a couple of times, but be ready for another sideswipe attack.

After getting them down to a third of their health remaining, Fecto Elfilis will turn the sky into a wavey purple. When they open up this star-shaped rift, they will call in meteors to crash down where you are standing. Dodge back and forth and try and set yourself up on the side of the arena for the last gigantic one. When you see that coming in, get as far away as you can, or you will be trapped in another attack that deals a lot of damage over time.

If you see them split into three copies and curl themselves up, start attacking them immediately. A ring will slowly come in, and if it reaches them, they will heal themselves. However, if you do enough damage to remove the blue line on their health bar, they will sustain extra damage. There is only one real one here, so if you deal damage to them without them disappearing, lay into them with everything you got before the ring closes in.

Once you have gotten their health down to nearly depleted, they will fall on the ground, and you will be prompted to use mouthful mode on their back to free Elfilin. A cutscene will then play with some button presses for you to deal the final blow. Complete it, and you will have finished the main story in Kirby and the Forgotten land.