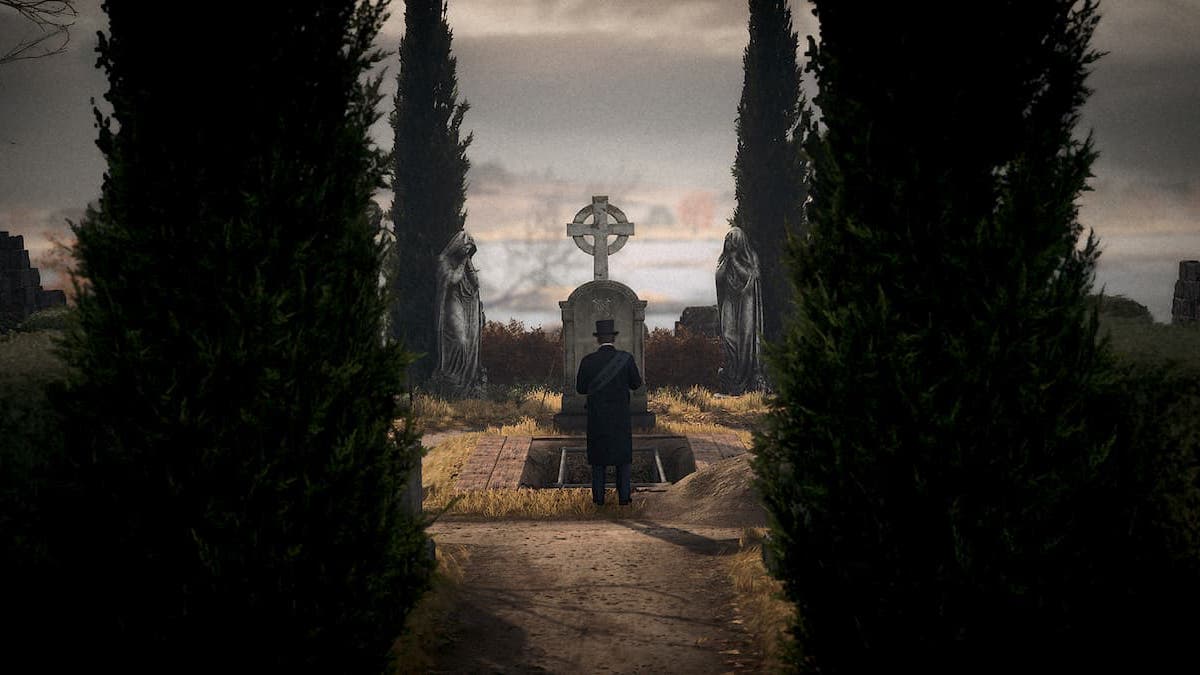 Nothing says Hitman like an assassination totally characterized by irony. In the murder mystery Dartmoor level of Hitman 3, Agent 47’s target is Alexa Carlisle, who has feigned her death and is staging a fake funeral. Through a Mission Story titled Her Final Resting Place, you can make this funeral a reality.

First off, we recommend that you steal the case file first, that way you can run off into the sunset immediately after offing Carlisle. Either way, the Mission Story begins when you overhear a conversation near the Graveyard, which is to the west side of the map. A couple of workers are talking about how the Undertaker and the family are having trouble with some crows in the area.

Head over to the Graveyard, and when you use your Intuition (your “Hitman vision” with the right bumper), you’ll see three crows nests highlighted in yellow. You’ll want to get rid of these nests, and shooting them is probably the way to go. But with a gardener and security nearby, they’ll get startled and search the area when they hear the gunshots, even with your silenced pistol. As such, you might want to knock out and hide everyone in the vicinity.

With the crow problem solved, it’s time to summon Carlisle to observe the funeral arrangements and burial plot. For maximum fun and irony, you’ll want to disguise yourself as the Undertaker. Wait until he’s near the burial plot and no one else is in sight to subdue him; if you’ve cleared the area, this should be easy enough. Also near that burial plot is a chest where you can dump his body.

As the Undertaker, approach the maid who was speaking about the crow problem at the beginning of the Mission Story. You can prompt her to call Carlisle to come right over. Wait for a minute as she makes her way from the manor to the Graveyard.

She’ll arrive with a security guard, and you’ll have to listen to her mouth off about how unimpressed she is with everything. As you’re playing the role of the Undertaker, you’ll have to respond to her comments with a button prompt whenever she’s done speaking. At this point, the Mission Story is technically completed, but let’s take this opportunity to hit our target.

She’ll eventually make her way near the burial plot, and wandering and making observations. Once the security guard has his back turned, and Alexa Carlisle is standing right above the open grave, you know exactly what to do. Keep in mind that there is a shovel nearby too if you want to complete the Undertaker’s job.