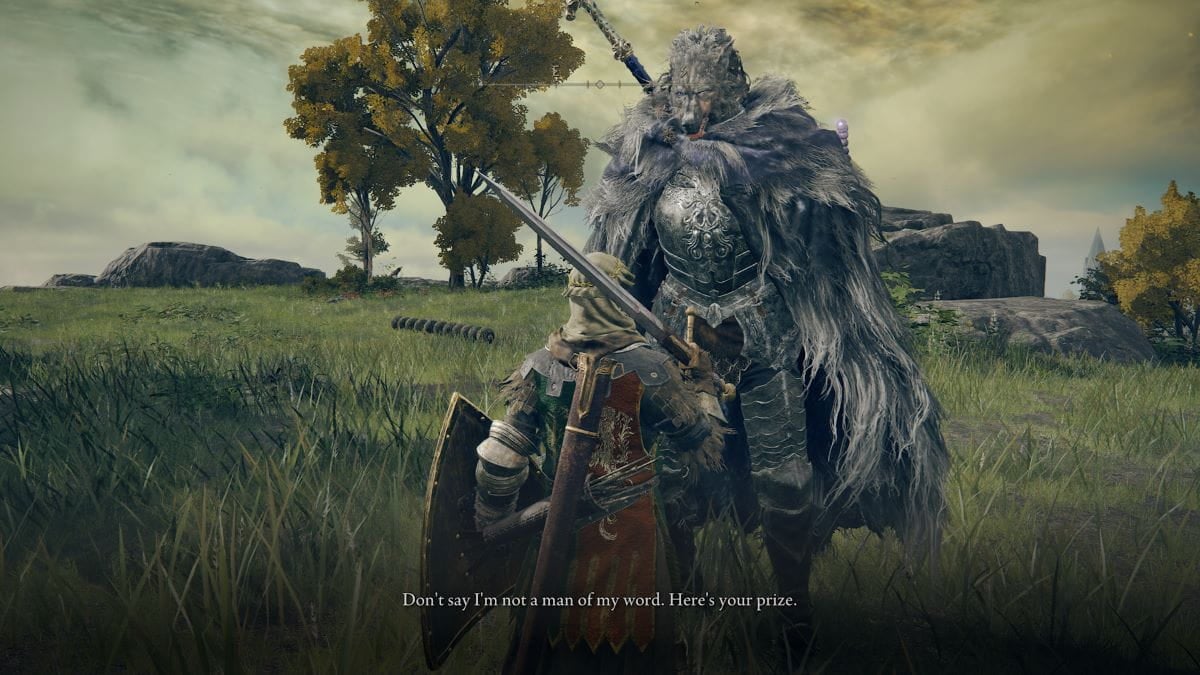 The initial Blaidd questline is one of many in Elden Ring where you can look away for a second and miss it. It’s definitely worth seeking out, though, as it can turn a potentially tricky optional boss fight into an absolute breeze, and there are some potentially useful rewards if you can see it through.

In order to trigger it, you’ll need to have navigated the early stages where you first meet the Merchant Kale in the Church of Elleh on your first steps into Limgrave. Assuming that’s a given, a trip to eastern Limgrave to find the Mistwood Ruins is in order. As an aside, at the ruins, you’ll find a large bear sleeping over the entrance to a small cellar with an Ax Talisman inside, which gives a 10% boost to your charge attacks (you can avoid waking the bear by sneaking in and then fast traveling to safety).

With the location now on your map, head back to talk with Kale and he’ll drop in a mention of Blaidd and how the two could be great friends, giving up a free Finger Snap gesture to help you win him over. With this in hand, head back to the ruins and listen out for the sound of a howling wolf. That’s your cue to use the gesture and Blaidd, also known as the Half-Wolf, will appear outside the northern section of the crumbled building.

How to find and kill Darriwil in Elden Ring

After a quick chat, Blaidd will tell you about someone called Darriwil who could do with being taught a rather lethal lesson. To find him you’ll have to head south to the Forlorn Hound Evergaol, located in the hills just before the bridge leading to the southern island. As with all gaols, you’ll need to initiate the center circle to head inside and be ready for a fight. Well, almost…

The bad news is that his full name is Bloodhound Knight Darriwil, and he’s a fast and deadly enemy who can tear you apart in a few hits. The very good news is that Blaidd is keen to get in on the action and he’s even tougher ― and if you interact with the glowing gold summon sign on the floor in front of you to get him involved, you can just stand back and enjoy the show. Trying this without Blaidd’s help makes it far, far tougher, but if you like a challenge then you can still solo it (there’s a Stake of Marika outside for a quick return if you die), with the option always there to tag Blaidd in if you need to as long as you’ve got this questline in play.

With Darriwil now spoken of in the past tense, you’ll automatically pick up the Bloodhound Fang curved greatsword as a reward, before appearing back outside the Evergaol. You’ll find Blaidd nearby who’ll offer up a Sombre Smithing Stone (2) before lending word of a blacksmith. This is Smithing Master Iji; he’s a big dude you’ll find behind the fake wall (removed just by hitting it) at Kingsrealm Ruins in northern Liurnia on the path that leads towards Carian Manor. Tell Iji that Blaidd sent you and you’ll now be able to buy a Carian Filigreed Crest from him for 5000 Runes. This reduces the amount of Focus needed to use your skills, which can prove very handy depending on your build.

While this essentially ends the core Blaidd questline, it needn’t end his involvement in your adventure, with the Half-Wolf also playing a significant part in the long-running Ranni questline. To keep a long story short, those events don’t go well for Blaidd, and if you like the look of his armor and greatsword eventually you’ll get to fight him for it…