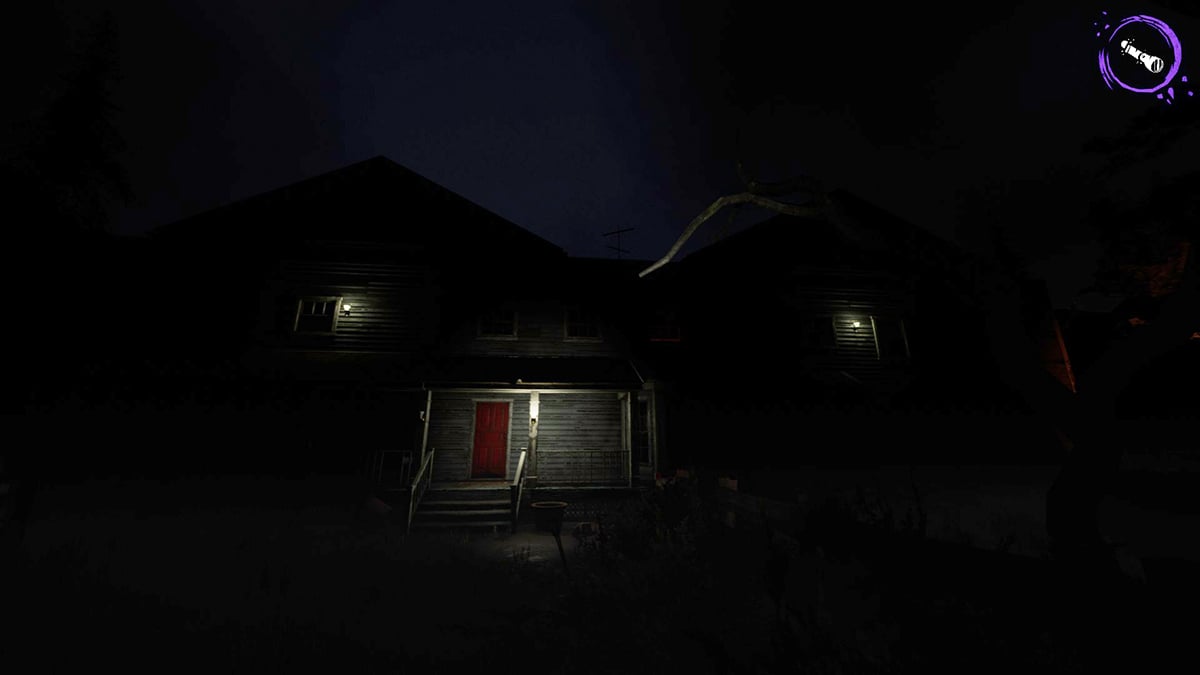 The Farmhouse is, lore-wise, the first map within the cooperative-horror game Devour. You’ll meet your first demon-possessed enemy here, Anna, and sacrifice some goats in the meanwhile to help pass the time. All in all, it’s a relatively simple map with straightforward mechanics and offers a strong introduction to Devour as a whole.

Players start Farmhouse in the woods, a short way from a wrought-iron gate that blocks the path towards the farmhouse. Hop on the small barrel to the left to leap over the gate, and pick up some interesting lore about goats. Much like the guide to completing Asylum in Devour, Farmhouse has two different mechanics that players will need to contend with to lay Anna to rest for good.

The first mechanic is fuel: players will find white bottles scattered throughout the Farmhouse map containing fuel. Bring these to the back of the Farmhouse. You can reach the back by walking around the right side of the house. Walk a short ways towards the back to find a large sacrificial altar. This is where you’ll want to drop all of the fuel to burn the small goats to death as a sacrifice.

The second mechanic to note is the goats mentioned above. Players will unlock a goat pen then need to find goats inside the house, baiting them with hay. Drop the grass near a goat, and pick it up while it’s eating. Then players will drop the goat in the sacrificial pit and burn them to progress the ritual.

First, ensure that you’ve amassed all hay at a location agreed upon by the party, the front door or back door is a standard, and mass all gasoline near the altar in the back. Each goat takes one container of fuel to burn, so you’ll ultimately need ten fuel canisters and ten pieces of hay. If playing with others, mass med packs as well.

Grab one can of gasoline and hold ‘E’ at the altar in the backyard to begin the burning. Walk over to the goat pen, located a short distance towards the house, and open the goat pen to allow the goats to escape. They’ll all run towards the house and enter in the basement door, knocking it over in the process. Enter the basement behind them, and make your way upstairs.

All doors are blocked for the time being until the appropriate keys are found, so there’s only one way forward: down the hallway, into the arms of Anna Puerta herself.

Some flickering will occur, a couple of strange noises, and the door will be unlocked as Anna vanishes. The map officially begins at this point: watch for demons that crawl around on the floor, and blast them with your UV light to quickly eliminate them.

This map isn’t too dangerous until goats begin burning, so now’s a good time to scour the area for keys and ensure your hay is within reach for the goats. Once you find a goat, drop the hay down for it to begin feeding, and then grab it when it’s vulnerable. Bring it to the altar, and drop it in for some old-fashioned fun.

As the ritual progresses, players will find themselves increasingly in danger of both demons and Anna Puerta herself. Looping is far more viable at Farmhouse than Asylum, as there are multiple doors that loop back onto themselves. Close doors to slow whatever abomination may be chasing you, but be wary that you aren’t trapping teammates with their demise.

If your battery is running dangerously low, try looping instead of fighting until it has time to recharge.

The second cage of goats is found in the attic: players will need to find the Attic Cage Key to release the second group of goats, which will need to be hunted down in the same manner. Ensure that the first five goats have already been hunted to ensure an easier time searching within the house. At this point, the gameplay loop for Farmhouse is obvious: use hay to grab a goat, drop it into the altar, and toss some fuel on it.

Once ten goats have been sacrificed, Anna Puerta can finally find rest, and Azazel’s plans are stymied once again. It only took the murder of ten goats, too, which seems like a low cost to stop the devil.