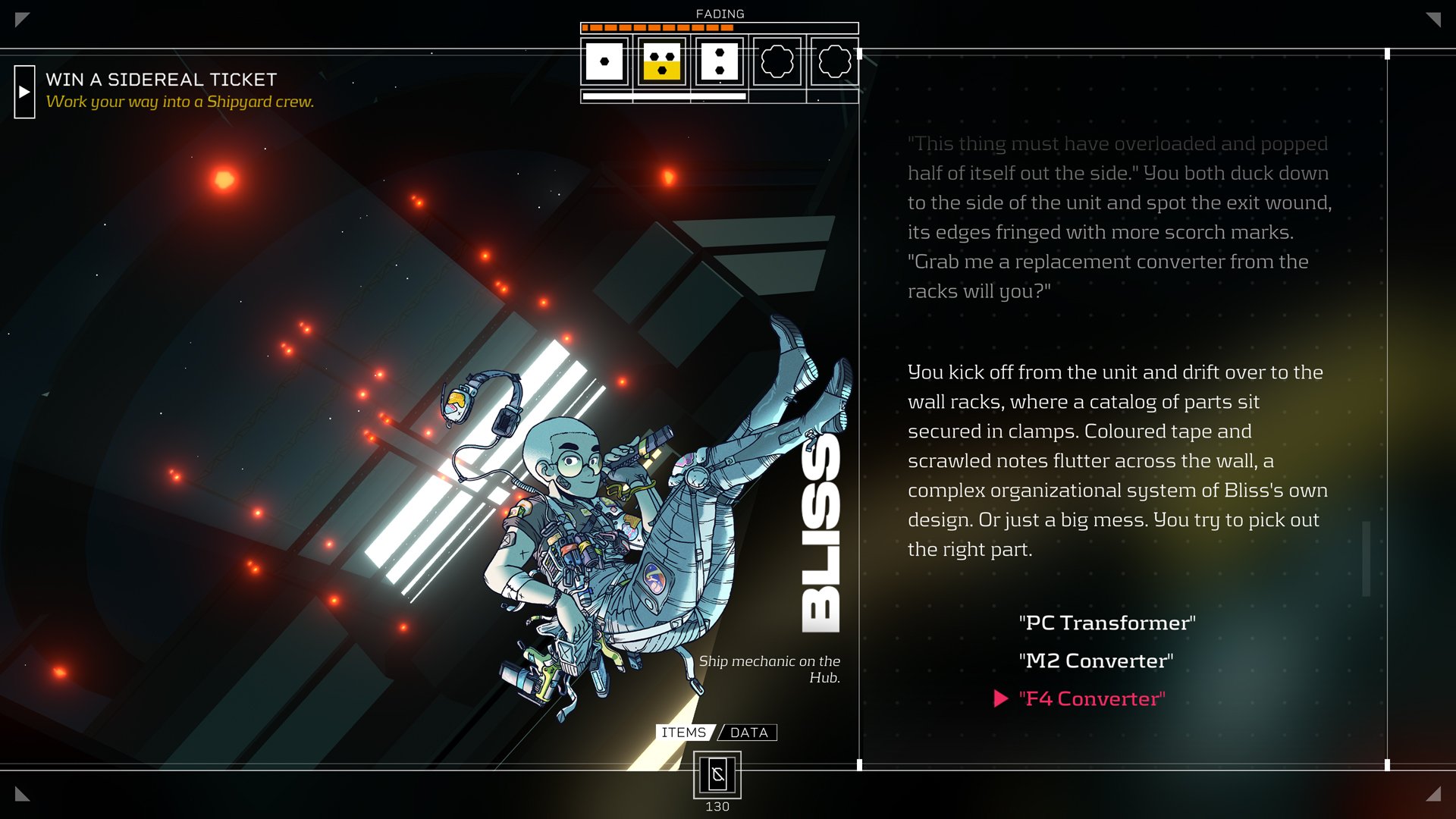 From the start of Citizen Sleeper, just about every player will be looking to escape the oppressive space station known as The Eye. Getting a Siderail ticket and boarding a ship off the station is one method of escape, and it’s actually tied to half of the game’s eight endings. Explaining the steps to acquiring the ticket(s) involves some amount of spoilers, so consider this your spoiler warning.

The first act of this quest involves building the Siderail — it doesn’t exist at the start of the game. The southern tip of the Eye has the Siderail construction site, where you’ll meet Lem. He’s a fellow laborer looking to help build the ship in exchange for passage for himself and his adopted daughter Mina. At this point, you’ll be able to start building it too. It’s a long task, as the quest tracker seemingly has more pips than any other activity in the game. Even worse, none of the workers will actually get chosen to board once the ship is built.

Hope is not lost, though: it’s time for the second act. You’ll need to have unlocked the Low End for this, so spend time with any task you prefer there until the area opens up. At that point, you’ll be able to meet the mysterious Castor. He’ll return later. During the same time, you’ll have the option to babysit Mina while Lem works. If you’re trying to get the Solo Ticket ending, you can ignore that. Otherwise, complete the quest to make a pledge to Lem to find passage for all three of you.

To kick off act three, you’ll need to reach the Hub. Complete tasks around the elevator to gain access to the lift, which will take you to the upper part of The Eye. It’s here that the Siderail is docked until departure. Upon examining it, Castor will return and offer to help. At this point, a new location called Celis Servers will appear near the old Siderail construction site. Hack it to gain either three IDs for you, Lem, and Mina, or a single ID if you ignored them in the previous act. Castor will then give you the hookup. With a single ticket, you can board the Siderail on departure day and kiss this space station goodbye.

Having all three IDs opens the door to three other endings, and it’ll bring Lem into the room when Castor hooks you up with tickets. If you choose not to tell Lem about them three times, you’ll discard the tickets, meaning none of you can leave. When the departure day comes, you’ll all be stuck on the station together, and you’ll get the Three Body Problem ending. The better endings involve bringing him up to speed at Castor’s place. Then when the day comes, you can board with Lem and Mina for the Long Journey to a Small Unknown Planet ending or stay put as they leave. That’ll get you the Left Behind ending.