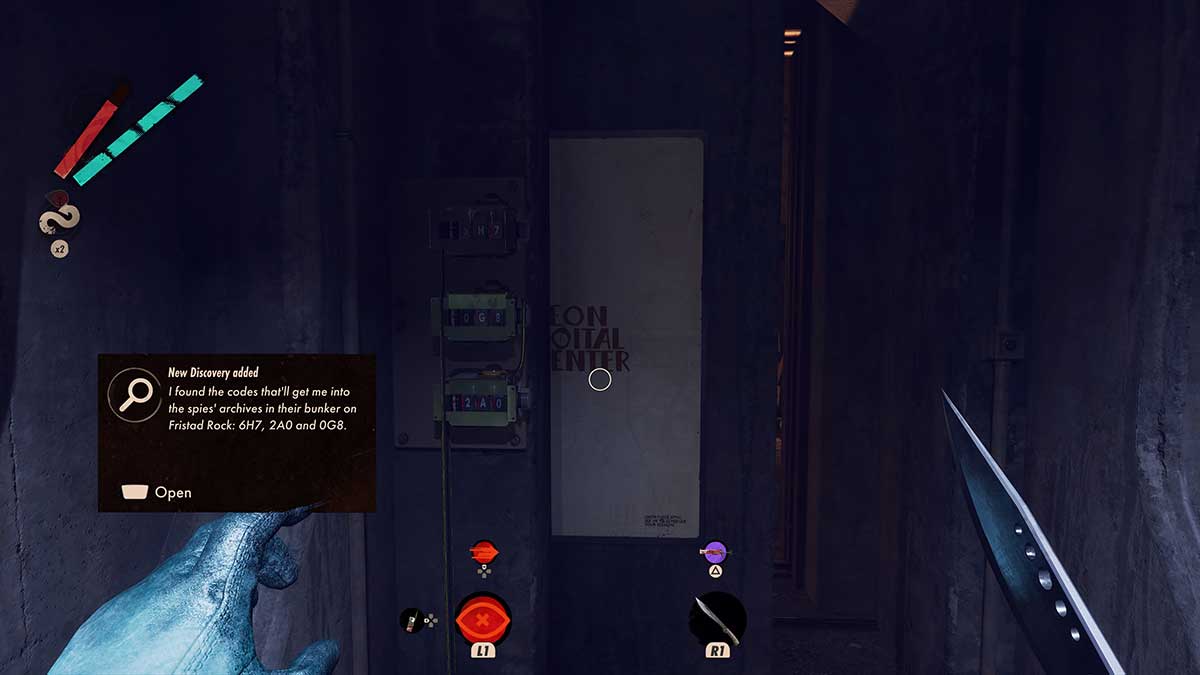 There’s a secret spy bunker in Fristad Rock in Deathloop that hides more than meets the eye. Upon first entering the bunker, which is locked with a doorbell just left of the tunnel exit to the area, you’ll discover that a group of spies has been monitoring the Visionaries on Blackreef since long before the loop started. However, there’s a door inside this bunker that’s impossible to open without a little help, which is why we put together this guide to get you through it and into the Spies’ Archives.

Getting into this bunker is easy. Enter Fristad Rock through the tunnel exit on the left. The door with the doorbell is to the left of the road you’ll emerge onto, but you need to follow the coastline further down until you find a gap in the rock. You can sneak into the bunker through a vent in that rock. Inside, you’ll discover one of the codes required for the locks on the Spies’ Archives door. Our code was 6H7, but yours may be different.

Step 2: Get the other codes

The two remaining codes are in Karl’s Bay and Updaam, behind two similar doors locked with doorbells. To unlock them, you need to listen to the radio for a while until some interference kicks in and a secret message plays. It will say something along the lines of the following.

For clarity, we have labeled what location the codes reference. This won’t be heard on the radio. You now need to visit Updaam and Karl’s Bay, find the doors with doorbells, and press those doorbells a specific number of times. In our example, you’ll need to press the doorbell at Karl’s Bay seven times to open it and the one in Updaam sixteen times. Since you know how to sneak into the bunker in Fristad Rock, you don’t need the code.

The door in Updaam can only be accessed in the morning because it’s in the apartment building to the left of Otto’s Workshop. The door in Karl’s Bay is to the left of the mammoth if you’re looking at its head.

Behind both of these doors, you’ll find secrets in Deathloop’s story that you didn’t know before. You’ll also find a similar code to the one you found in Fristad Rock. It’s worth writing them down because you won’t get a prompt for what they are when you need them.

Back in Fristad Rock, you need to type all three of your codes into the three locks on the Spies’ Archive door. It doesn’t matter what order you use. The lights on each lock will change from red to green to indicate when you’ve entered a code correctly.

When the door opens, you’ll find a map with the clues you work out over the entirety of Deathloop’s campaign laid out in front of you. The spies had worked out how to kill every Visionary long before Colt had, but they also had files on him. It seems as though Colt is a pilot from 1911 who somehow came through a plane through time and possibly space to end up on Blackreef. He did this after spending fifteen years locked in a time loop himself, only to arrive in the future just as another loop is being prepared.

The final secret to discover is a big one. There’s a note talking about a song from the radio that has a recording device next to it. Press the button, and you’ll hear the Drunken Whaler song from Dishonored 2 playing very faintly. This is the second indication that the worlds of Deathloop and Dishonored are somehow linked.

You can even find two of the spies who assimilated into the loop still hanging around. If you make your way to Updaam in the afternoon, look to the left of the huge wolf head by the mansion’s entrance. There are two Eternalists sitting together, and if you wait long enough, they’ll start talking about the spy they both killed so they could live forever.