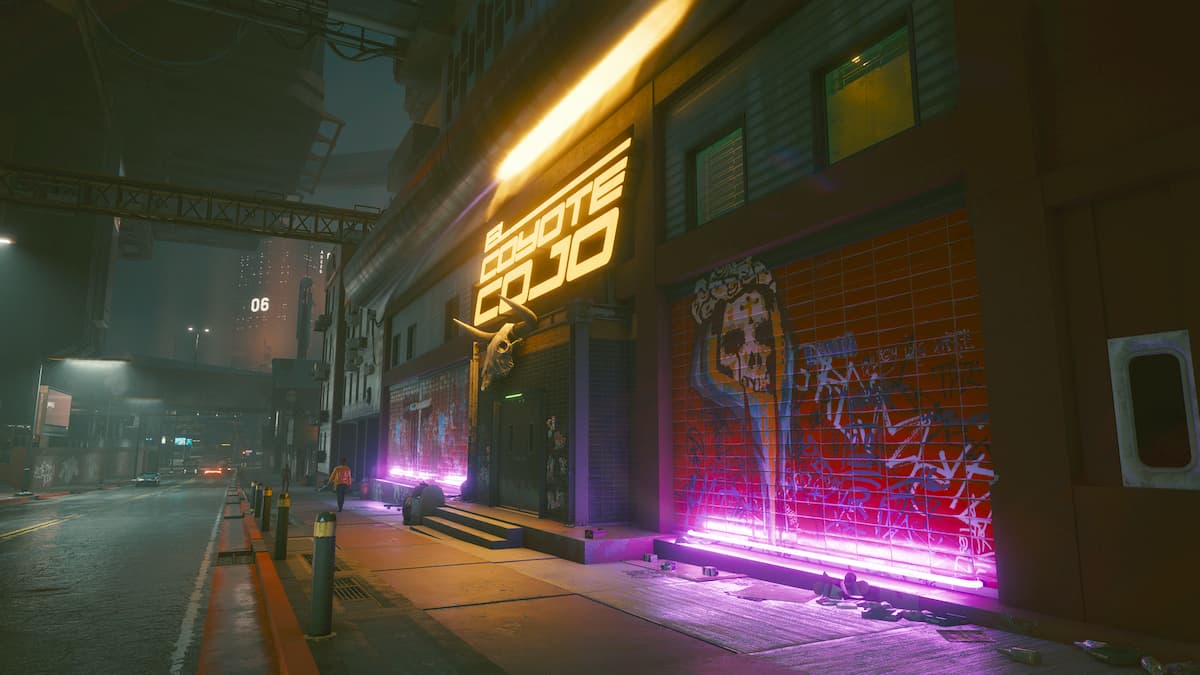 Good times don’t last forever, but the time you had with Jackie was fun in Cyberpunk 2077, even if his time in the game was chalked up to serving as the tutorial. After Jackie perishes when you obtain the relic, and the dust settles, Mama Welles will reach out to you, and if you’re polite to her, she’ll invite you to pay your respect to Jackie at the El Coyote Cojo.

You can find the El Coyote Cojo in the south part of Heywood. It’s below City Central, and you can reach it by taking a fast travel point that you can find right next to it, making a quick skip across Night City.

When you arrive inside, you’ll find Mama Welles, and the two of you can talk about Jackie’s passing. She’s honored you came by and wanted to respect her son. To honor the tradition of the funeral, you agree to find something in Jackie’s garage to give to Jackie as he went through the afterlife.

How to find Jackie’s Garage

The garage’s location is not too far from the El Coyote Cojo. The quest notification will bring you to the back of the bar, and it’ll show you that it’s 50 meters away or so. When you arrive, you’ll find Misty on the ground sitting next to the entrance. She admits she’s been here the past few nights, waiting for Jackie to show up, even though he never will again. The two of you talk, and you have the chance to bring her into the garage to help you find something to remember Jackie.

Choosing an offering for the ofrendo

When you reach inside the garage, you need to find the right offering for Jackie. There are several items around the room, and Misty will comment on many of them. The two big items you can take with you to the ofrendo are the basketball, the ground in the right corner of the room, and the book by Ernest Hemingway. Grab both of those, and you have the option to leave. However, there’s a locked door here, which leads to Jackie’s room where he slept.

Where to find Jackie’s Room key

The key to the locked room is not too hard to find. It’s on the garage’s desk, to the left of Jackie’s strategic reserve of beer. Take the key and bring it to the door.

You and Misty will be able to share multiple more exchanges in Jackie’s room, and you’ll be able to grab an unsealed bottle of his favorite tequila and his father’s belt. When you’re ready to leave, you and Misty can attend the ofrendo back at the El Coyote Cojo. Before you leave, you can convince Misty to come with you or have her stay in the garage.

When you arrive at the ceremony, multiple characters connected to Jackie will appear and saw how they cared about the man and how they connected. It’s an extremely touching occasion for a character. When it is your turn, here are the choices you can make during your speech. Of the three, we went with “his friends were everything.”

These are your next choices. We went with, “He put his loved ones first.”

The next choices are these. We went with, “He did not fear life.”

When you approach the alter for Jackie, make sure to read the passage from the book, Ernest Hemingway.

How to get Jackie’s motorcycle

After it all, Mama Wells will speak to you and thank you for your kind words. If you invited Misty to the ofrendo, Mama Welles would put out she was here, but not say her name. If you insist on how important Misty had been to Jackie and how much the two need to connect, Mama Welles will offer you the keys. Accept it, and you’ll receive Jackie’s motorcycle.

The exact choice you want to make when speaking to Mama Welles is, “She was critical to him.”

After you receive the motorcycle, you’ll be able to speak to multiple key characters who arrived. You can talk to Viktor, the bartender, Mama Welles, and Padre. All of these characters are on the bar’s ground floor, except Padro, who is on the second floor, so you’ll need to go upstairs to talk to him. When you’ve spoken with everyone, you can leave the bar and try out your new ride.

To switch from your car to the bike, hold the button that you use to call your vehicle instead of just pressing it. This will bring up a new menu that will let you switch vehicles. You will only have two options at this point, your car, and Jackie’s bike.