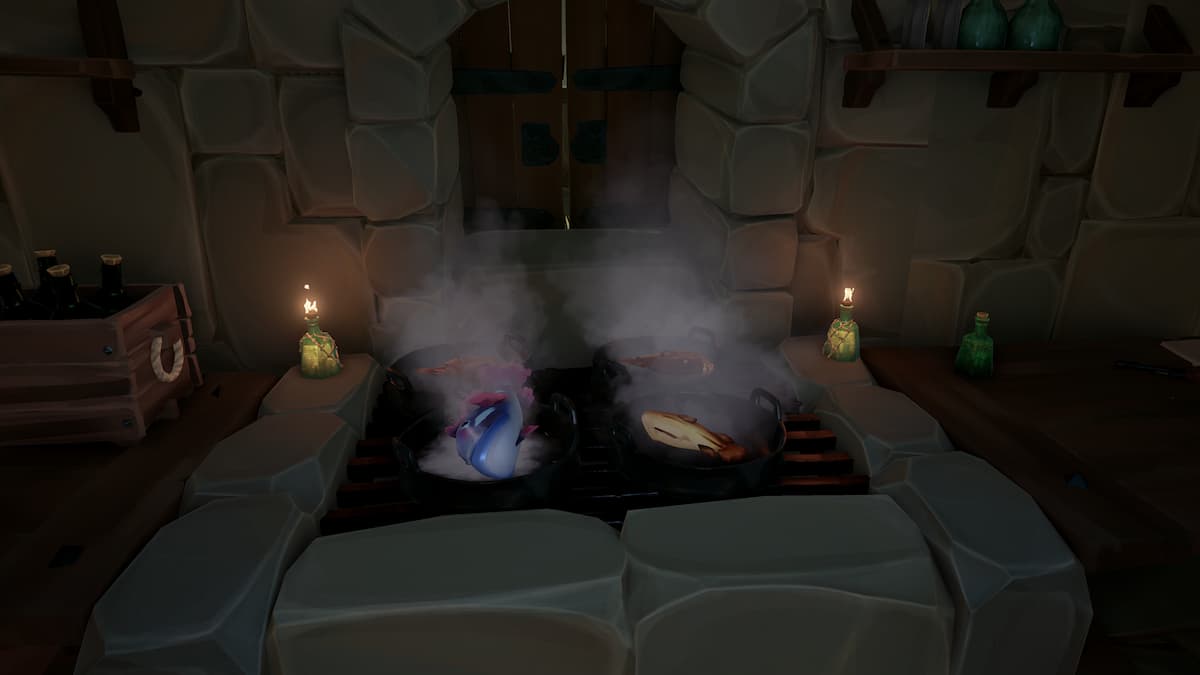 As fun as fishing, hunting, and cooking can be in Sea of Thieves, one of the most annoying aspects of the game is that each ship, despite its size, only has one cooking pan. Getting your fish to that nice brown color takes a bit, and you might have a lot of meat to sell to Hunter’s Call. To alleviate this pain point, each of the six Sea Forts — added in the Season Six update — has four burners for you to cook on, and a Commendation comes with this.

Check under your Pirate Log, then under Bilge Rats, and finally the Sea Forts section — the Faster Chef Commendation reads: “Cook a meal using all Sea Fort pans at the same time.” You only need to do this once; this Commendation does not have multiple grades and you can knock this out fairly quickly. All you need are just four fish or pieces of uncooked animal meat to throw onto the stovetop.

When you start up a session, check the map on your ship and locate the nearest Sea Fort. On your way sailing to the Sea Fort, you can cast your fishing line and catch some fish to cook later on. However, upon your arrival, you’ll meet some opposition, either from the Phantoms that occupy it, or very rarely, players who have already beaten you to it. Because of that, we recommend keeping any fish you catch on the way in your ship’s food barrel, as you’ll need your personal inventory space to heal up.

Once you’ve defeated a Sea Fort, it’s time to get cooking. If you don’t have four pieces of meat yet, then it’s fairly easy to step outside and go fishing — or kill some sharks if you’re feeling risky. Better yet, have a full crew of four pirates to all fish at once. When you have enough meat, go back inside the Sea Fort and take a left; the stove will be on the left side against the wall. Toss fish or raw meat onto all four of those pans — once all four are sizzling simultaneously, you’ll earn the Faster Chef Commendation.