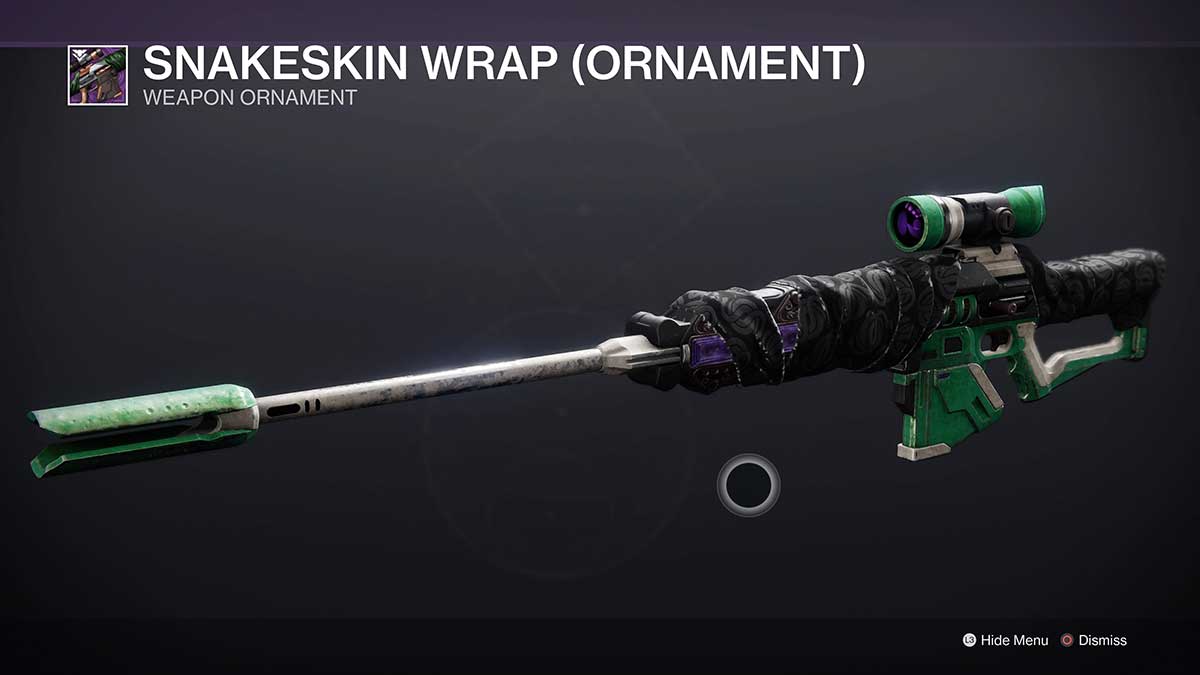 Snakeskin Wrap is one of the three Ornaments available for Adored, one of the most beautiful pinnacle weapons in Destiny 2: Beyond Light. In this guide, we’ll discuss how to pick up the best-looking Ornament for Adored. Not only does this Ornament look the best, but it’s also the easiest to pick up. Let’s dive into how.

The quest to get Snakeskin Wrap is called “Snakeskin Wrap.” You can pick it up from The Drifter after you’ve managed to earn Adored itself. If you picked Gambit as your activity of choice for earning the legendary sniper rifle, get ready for more. Since Snakeskin Wrap is the Gambit Ornament, it means you’ve got to play Gambit.

There’s only one step for this quest, but, as you should expect, it’s all about using your newly acquired sniper rifle Adored. You need to do the following.

The only thing that makes Snakeskin Wrap quest daunting is that you need to do it all with a sniper rifle. If you pick it up right after you’ve completed the quest for Adored, though, you’ll still be in the right mindset for grinding out the sniper kills.

The easiest step is banking Motes. This is something that happens in every match. You don’t even need your sniper rifle equipped. It will complete itself in the background.

Getting 70 kills with a sniper rifle is also quite easy. Unlike the quest for Adored, you only need to get kills, not precision kills. Every time you start a match or respawn, head to a point where you can see the enemies in the distance. Locate the weaker ones through your sights and kill them as fast as you can.

You’d be surprised how quickly you can rack up the kills here. We completed the quest in only three matches, though we were paying more attention to getting sniper kills than actually winning.

This quest’s final part is easily the most challenging, getting rapid kills with a sniper rifle. We don’t know exactly how quickly you need to get the kills to make them count for the quest, but it seemed like killing two enemies within two seconds was about right. Again, find the weaker enemies through your scope, and kill as many as possible.

One final tip we have for this quest is to reload often. Your sniper rifle will only have one or two bullets when you spawn, and you’ll have to pick more up over the course of each match. Every time you see that you’ve got space for another bullet in the magazine, reload. You don’t want to be caught short when there’s a group of enemies in the distance, and you have to reload after one shot.

Step 2 – Revel in its beauty

Once you’ve finished the quest, it’s a simple case of visiting the Drifter and picking up your prize.

This is by far the easiest Ornament to acquire for Adored. Each Ornament requires sniper-based actions in a different activity. We don’t need to tell you how difficult that can be in the Crucible. If you want to get every Ornament for the weapon, we suggest starting with Snakeskin Wrap.