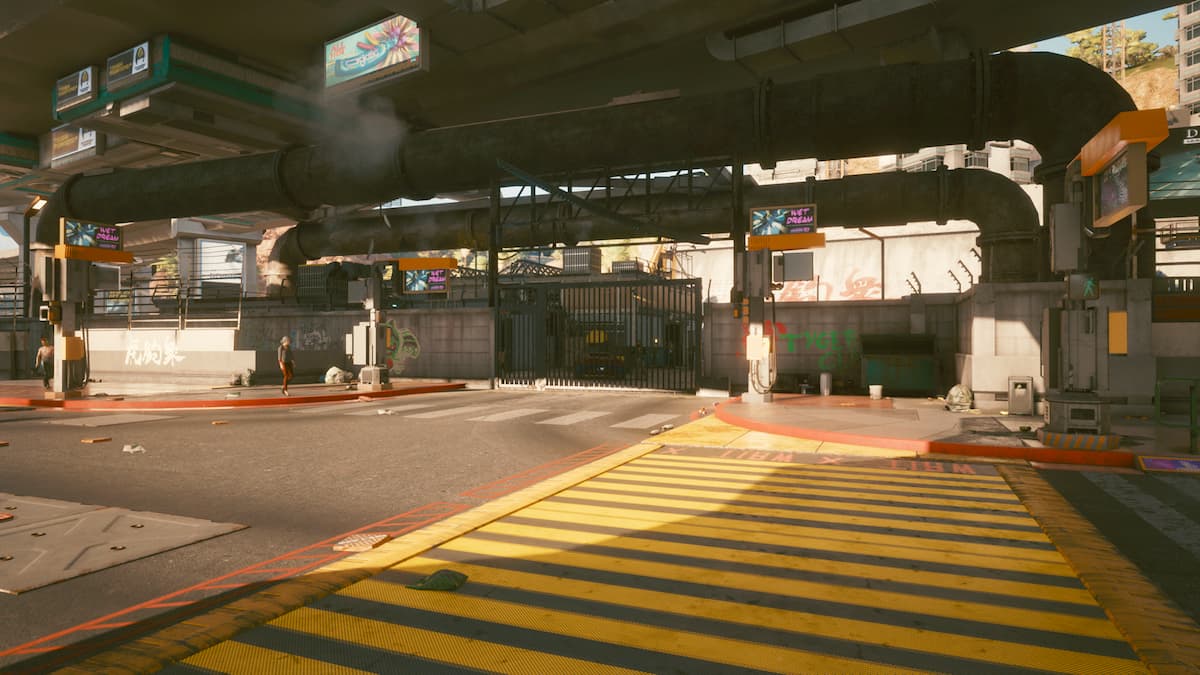 If you’re careful and play your cards correctly in Cyberpunk 2077, you can save lives in Night City. In the We Have Your Wife gig, you need to save Lauren Costigan, taken by the Tyger Claws. Lauren’s husband, Bradley, refused to help out the Tyger Claws while in prison to take care of snitches, so they took his wife. It’s your job to save her.

Where to start the We Have Your Wife gig

The start of the gig is in the northern portion of Japantown, right at its tip, near the highway that connects the district to Northside.

How to get into the workshop

Your first task is to sneak into the workshop where the Tyger Claws are holding Lauren. When you arrive, the gate is locked, and a few guards are patrolling the entrance, so going through the front is not the best option. You can find an alternative route by going to the left side. There’s a wall with an entrance that allows you to slide straight into the complex without alerting the guards at all.

Where to find Lauren Costigan

Once you’re inside, you’ll need to find Lauren and secure her. If you head inside using the broken area of the wall, there’s a camera straight ahead. We recommend breaching it, disabling it, and then using it to ping to the location where you can find all of the enemies. There will be several Tyger Claw members walking around the area, so you’ll need to remain mindful of them as you search for Lauren.

If you ping all of the enemies, you can tell that several come up underground the large building at the center of the area. That’s likely where Lauren is being kept. On this side of the building, the door is locked. If you have eight points in body, you can force it open, or if you have an access key, you’ll be able to enter it. The key is likely somewhere at the front of the complex. Alternatively, there’s a dumpster next to this locked door you can jump on to make it to the roof, and on the third story, there’s a window you can slide open to sneak into the building.

We made our way inside and were at the top of the building. We could overlook the entire facility. However you make your way inside, locate a camera, hit it to ping all of the enemies nearby. You can drop down from the top section and open up the door behind a guard to knock them out. If you went through the side door, you could lure the guard to that room using an array of distractions. Once they’re gone, go down the stairs of the door they’re guarding.

How to find Lauren’s Cell

When you reach downstairs, there are two guards in the central area walking around, speaking with each other. One is pointed at you, but if you follow the platform until the guard rails are gone on the side, you can dropdown. Do this, and hug the right side of the room.

There should be a door with a guard on the other side, facing away from you. They lead you to Lauren’s Cell, and if you take him out and loot his body, he has an access key you can use.

How to escort Lauren out of the building

Now that you have Lauren, she’ll follow you around during the mission. You want to use the front door to her cell, the one you did not enter, to exit, and there will be three visible guards. The first, on your left, is the easiest to take out first. Drag them into her cell, and hide the body. Then move to the right, and use the small gap to sneak behind the second and then the third. Once you take those three out, this floor will be clear.

Next, return up the stairs you came. If you came from the roof, you wouldn’t be able to go the same route, and instead, you’ll have to stick to the back of the garage and follow the path to the right. You’ll go through two doors, and the second door takes you outside. You can leave the area the way you came in, through the large gap in the stone wall.

Once you’re outside again, you can lead Lauren to a nearby car where you need to speak with her quickly to indicate the car is for her. When she takes it, the gig is finished.