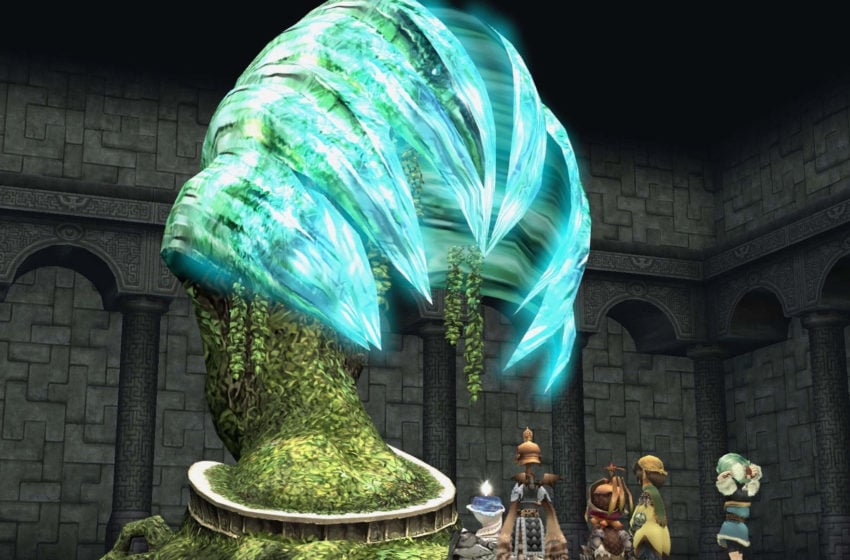 Remastering games can be a challenging prospect for any development team. The choice of game is essential. You need to pick something that has an “It factor,” something beyond a pure sense of nostalgia from a loyal fanbase. Older games often don’t hold up very well when it comes to control schemes and mechanics, so you need to settle on a project where the endless march of time hasn’t exposed too many cracks in old design ideas.

If I had to pick one thing to define the original Final Fantasy: Crystal Chronicles, it would be the charm. There was something endearing about this action RPG when it was released in 2004. The good thing about charm is that it is eternal, but can a new lick of paint and a few extra features make Final Fantasy: Crystal Chronicles Remastered worthy of your time and money?

In Final Fantasy: Crystal Chronicles, you take on the role of a young member of a family setting out to take on all the dangers of the world in order to help the people of your town. Many years ago, a meteor fell, bringing a dangerous miasma that covered the land. Villages and towns stay safe through the use of giant crystals powered by a substance called myrrh. It is up to you to take on dangerous dungeons and travel the world to track down myrrh and keep everyone you know and love protected.

After creating your character, picking from one of four Tribes and eight occupations, you hit the road. You quickly make a friend called Mog, a small, fluffy creature who will help you on your journey. In your possession is a chalice that serves a dual purpose. You can use it to store myrrh that you find, and it will also keep the miasma at bay, ensuring your safety while you explore the game’s many dungeons. As the in-game years pass, you gain access to new areas, and older dungeons will have new paths you can take, adding variety and structure to the proceedings.

The chalice will also allow you to traverse the world map, moving through dangerous miasma streams that criss-cross the land. All these streams have an elemental type, and the only way to cross them is by having a chalice of the same element. To do this, you venture into dungeons, fight monsters, find treasure, and take on bosses in the game’s action-RPG gameplay. The dungeons also contain altars where you can change your chalice’s element.

All this is the same as the original game; little has changed when it comes to the gameplay itself. Crystal Chronicles Remastered’s main selling points are that it offers improved graphics, an English voice track, an updated soundtrack, some UI changes, a very welcome map change, and some new post-campaign content in the form of more difficult dungeons.

It is important to remember that this is a remaster, not a remake. Just as in the original, all your attacks and spells are tied to a single button, and you use the shoulder buttons to switch between attacking, defending, or casting spells from your command list. When combat gets busy, it can take fleet fingers to feel effective, and some players might find this system a little off-putting. I adore it, truthfully. It might be the nostalgia talking, but the reasonably simplistic combat mechanics of Crystal Chronicles Remastered still feel good, all these years later.

Combat in this game is all about animation timing. You wait until an enemy commits to an attack, then use the available time to dodge and cast your own spell, or rush them and chop them down with your weapon. While it might be simple, it’s a world away from the often mindless button mashing that modern action RPGs can boil down to.

You need to constantly carry your chalice with you in dungeons, providing you a safe place to fight in, although your Moogle friend can help with this. This limits your arena, and positioning becomes essential. You’ll need to draw enemies in and deal with them one at a time. That is, unless you’re playing in multiplayer, where tactics can become more advanced and someone can act as a frontline while others cast damaging spells or top up the parties’ health with curing spells.

Despite not being able to try out the multiplayer mode (a common issue when reviewing a game due to the small number of players who have access to the game at the time), this is one area I can tell has improved dramatically, even without being able to play it. Crossplay means people on PlayStation 4, Nintendo Switch, Android, and iOS can all play together. This is a far cry from the days of the original, when all players needed a Gameboy Advance to play together. A GameCube could run the game, and you would need to use a link cable to connect your GBAs to play multiplayer, setting a considerable barrier of cost for may people.

It was a pretty ludicrous method of playing multiplayer, even back in 2004, so if you always wanted to play the game but were unable to do so, you will find things far more accommodating this time. You simply load into the multiplayer menu and host or join lobbies with all the convenience of modern games.

While the graphics might be HD, little else has changed with how the game looks. There are some new options for character creation, but the character models appear to be the same as the original version. Once again, this is an area I am okay with, but some folks may feel shortchanged. I, however, love the blocky bodies of the minions you fight in Crystal Chronicles Remastered.

The story is also the same, with few changes across the world map or the game’s many secrets and systems. The charm remains, however. The combination of the wonderful soundtrack, earnest writing, and family-driven story combine to become a fun and heartwarming tale. In a way, it feels like playing through a bedtime story.

The main thing that stands out as a negative is the new English dialogue. New is perhaps a generous word, with the stilted and choppy delivery leading me to believe that all this was recorded for the original game and simply didn’t make the cut at the time. While better than nothing, it is not the Remaster’s strongest area.

The leveling system also feels practically quaint by modern standards, with no real benefit to killing monsters beyond the items they drop. Your stats are tied to the items you use, so paying blacksmiths and merchants to upgrade your arsenal is how you keep the power curve moving in your favor. That is just part and parcel of remastered games that are nearly 20 years old.

While I thoroughly enjoyed Final Fantasy: Crystal Chronicles Remastered, the good news is that you don’t even need to take my word for it. Probably the best thing about the remaster is the Lite version. This trial allows you to play the game’s first three dungeons, enjoy crossplay with your friends, and even venture through 13 dungeons with a friend who owns the game. The game is also free on Android and iOS, giving you the light version that you can then fully unlock with in-app purchases.

If you always wanted to play Crystal Chronicles, this is really the best way to do it. The classic charm is there, with the right kind of modern conveniences. Still, people should also keep in mind that much of the appeal is bedded in systems that will feel dated and maybe even annoying to people who have never experienced them before. That said, the game still possesses that special je ne sais quoi that made us all fall in love with it the first time around.