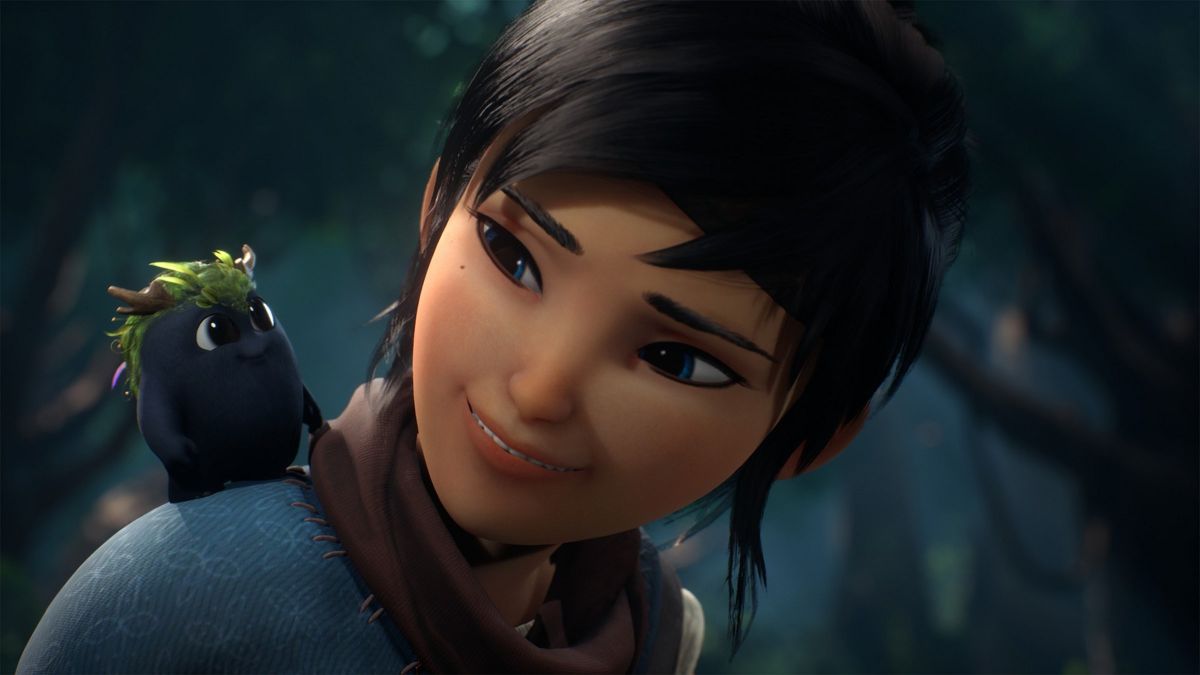 If you grew up in the 1990s and 2000s, you might remember how much talk there was around video games looking like a Pixar film. Especially in the Nintendo GameCube, PlayStation 2, and Xbox days, that is the benchmark everyone was aiming for. In the time since, we have had games that could be described that way, but I don’t think any of them nail it like Kena: Bridge of Spirits does. Playing throughout Ember Lab’s debut game consistently had me amazed at the quality on display in their cutscenes and in gameplay, but that’s not all there is to love here.

A worthwhile story that leaves you wanting more

Kena: Bridge of Spirits follows Kena, the newest spirit guide in a family line. Spirit guides meet up with recently deceased people who are having problems moving on and aid them. Each chapter of the game has Kena learning about a new spirit torturing themselves that will require the player to work their way through areas of corruption. Along the way the player will fight demonic entities tied to that spirit’s pain, while also meeting the people close to that spirit and learning about their backstories.

Learning about these people and how they would interact with each other is another high spot in the journey. I was always excited to talk to NPCs whenever they popped up in the world. Not only did I want to know about their connections, but I wanted to hear what they had to say about the environment around them.

The only down point for me in the story is we do not learn enough about Kena. She is a great protagonist that gives hints to her family line, but all I want now is a follow-up game or movie to explore a story more focused on her rather than the people she meets.

Simplistic gameplay that could be improved

Every inch of gameplay in Kena: Bridge of Souls is easy to understand. Your little friends called The Rot will cover moving objects around, allowing you to reach new areas at your command and they are integral to freeing up corruption spots throughout the land. Overall, world exploration and puzzle solving feels good, although I wouldn’t say it does anything too interesting. Puzzles usually only consist of having The Rot carry an object somewhere for you to interact with. Not much beyond that, but it is still enjoyable. However, it’s when you get into combat encounters that I think the game stumbles.

For starters, the difficulty spikes are very significant with bosses. Normal enemies you come across will be taken care of easily enough, with most of them going down in just a couple of hits. However, all bosses, either the main ones or mini, are tanks that not only take tons of hits, but are also fast and can kill you quickly. Your defense consists of dodge rolls and a shield that can parry attacks if put up at the proper time, but I found both of these to be inconsistent.

For whatever reason, I could never get the parry to work consistently. I swear through all of my runs with bosses I was studying their moves and hitting the shield just before contact, but it would work one time and completely fail the next. Dodge rolls were the same, sometimes being a great way to avoid damage, but sometimes it felt  impossible to avoid getting hit. I did find them to be more reliable than the shield and parry though.

The game does give you an extra hit before killing you each time, but I felt this was a way for the dev team to say, “Sorry our combat is a little wonky.” It’s like when a platformer leaves lives in front of a section that takes a little bit of luck to pass.

Offensively, your options are very limited. You have light and heavy attacks with your staff and can convert it into a bow for ranged attacks, but there is not much outside of that. If we ever see a sequel, I would really like to see what kind of interesting tools Ember Lab can come up with to make fighting feel more dynamic. A good place to start would be more interesting upgrades. After leveling up by finding Rots, there’s nothing I would say is a must buy. Sure, there’s a couple nice additions, but overall the upgrade system is barebones and forgettable. If it wasn’t so fun finding The Rot hidden in the world, I wouldn’t even bother.

It comes back to those looks

At the end of the day, the biggest selling point of Kena: Bridge of Spirits is its graphics and animations. Cutscenes all feel worthwhile with great characters and environments that suck you in. It really makes me want this team to make a full movie in this world. If you are unfamiliar, Ember Lab made a Legend of Zelda: Majora’s Mask short video called Terrible Fate that was amazing as well, so seeing the quality put into the cutscenes of Bridge of Spirits doesn’t surprise me. The team are very obviously most comfortable with giving you a beautiful looking scene and drive the story forward with that. I want to see them expand on this world and on Kena as a character.

Overall, the issues I have with Kena: Bridge of Spirits’ combat could not put a damper on how much I enjoyed the overall journey. The theatrical quality to this game is second to none. After putting my time into Kena, I find myself only wanting more, whether that is through a video game or some other media.