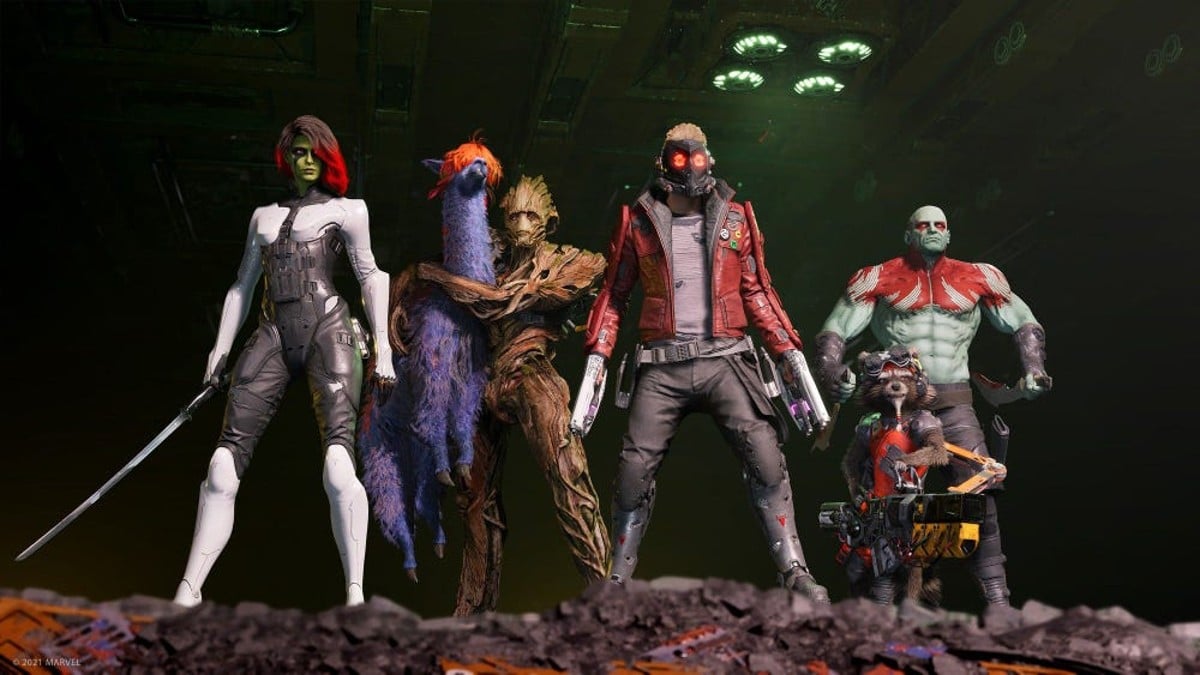 Ever since the Guardians of the Galaxy went mainstream with a hit movie, the entertainment industry has been full of imitators attempting to capture the same magic of a ragtime team of misfits with attitude. Years later, the premise has staled quite a bit, but Square Enix and developer Eidos-Montreal have tried to keep it fresh with Marvel’s Guardians of the Galaxy, a third-person action game. While the personality of the game may seem overly familiar, there are certainly sparks of creativity — arguably too many.

It’s difficult to compare the experience of playing this game to any one other title, as it often feels like a mosaic of interlocking ideas. What results are moments of surprise and satisfaction, but interweaved with an overwhelming feeling of stimulation. There’s quite a lot to juggle in the moment-to-moment gameplay of Marvel’s Guardians of the Galaxy. It can get quite messy, even late in your playthrough. Underneath these controls and systems is a human and heartfelt story set against a trippy world.

If you loved the Guardians of the Galaxy property from the movies’ depiction of a found family going through relatable personal struggles, you’ll find a story worth fighting through the flaws for.

Come and Get Your Love

The cinematic version of Guardians of the Galaxy is quite different from the comics version, with the former taking more of a comedic and rebellious angle. The Eidos-Montreal interpretation smartly pulls from both sources, even though the tone is decidedly more similar to the MCU. The use of 1980s music and character personalities should be familiar — Peter Quill aka Star-Lord is a roguish gunslinger full of 80s pop culture references, Gamora is a self-serious warrior looking for redemption, Rocket is a tinkerer and wild card, Drax is a brute who takes everything quite literally, and Groot is a loveable giant with three words in his vocabulary.

Meanwhile, the backstories for these characters pull more from the comics, one big example being Quill’s parentage. His Elemental Guns are also lifted from the page, as opposed to his generic guns in the films. Several characters like Lady Hellbender, Nikki Gold, and the villainous Grand Unifier Raker are also from the comics. This game, while not an origin story, takes place in the nascent days of the team, with existing tension between Gamora and Drax, and frequent leadership disputes between Quill and Rocket.

All of these characters are marked by personal tragedies from earlier in their lives, and in between moments of genuinely funny moments of levity are earnest scenes of these characters unpacking some heavy emotional baggage. The plot of the game can sometimes be hard to keep track of, with a scheme by the Universal Church of Truth revealed in a slow burn, but the proper story is quite clear — at its base, it’s a story about grief and accepting loss. It’s a theme reflected by nearly every character in the game, regardless of allegiance, even serving as the root for the main baddie’s scheme.

Hooked on a Feeling

Despite the eclectic cast of quirky characters, the only Guardian you’ll directly control is Star-Lord. With his Elemental Guns and jet boots, playing as Quill feels like a standard third-person shooter, albeit with a lock-on and some fairly limited mobility. But Eidos, in a sense, tries to let you have it all, as Quill can give commands to the four other Guardians. In theory, you’re essentially controlling the entire team at once.

The results are fairly mixed — you’ll hold down the left shoulder button to bring up the other Guardians in a small menu, and you can command them to attack an enemy you’re locked on to using one of their Skills, unlocked using Ability Points. But combat can get pretty frenetic, with enemies all over and several visual elements thrown at your face. It’s quite silly to see Drax or Gamora materialize from thin air when you order them to attack a faraway enemy, but by combining team moves, you can earn some combos and fairly cinematic moments. It’s an interesting concept, having the other Guardians serve as extensions of Star-Lord, whether it’s on the field or through environmental puzzles in between fights.

Quill is ultimately a team leader, not only focused on tactics but also morale. By hitting both shoulder buttons, you’ll call your team over for a Huddle, and your teammates’ complaints or exclamations are displayed as wordart; you’ll have to choose the right response to give the entire team a damage boost and revive fallen members, and 80s songs like “White Wedding” or “Never Gonna Give You Up” will blare in the background. It’s an excellent idea conceptually and visually, but mechanically, Huddles are nothing more than exercises in basic reading comprehension. Not to mention, with Elemental attacks mapped to the right shoulder button, I very often accidentally activated Huddles, adding to the tangled mess that combat can sometimes turn into.

Despite some combat gripes, Marvel’s Guardians of the Galaxy is extremely strong aesthetically. The game adaptation arguably goes further into the psychedelic visuals than the films, with colorful environments, unusual architecture, and trippy visuals that recall Scarecrow sequences from the Arkham games. Just like those Batman games, Guardians likes to mess with player expectations and their perception of the game’s reality.

Even with comics, television shows, and movies to compete with, this version of the Guardians looks distinct enough, with a level of intense detail in each character model — the texture on Star-Lord’s jacket, the beads on Rocket’s facial hair, the swirls on Drax’s tattoos, and so on. They are all very much the same characters, but this game avoids the uncanny valley effect that Marvel’s Avengers greatly suffered from.

The voice cast, unlike in Marvel’s Avengers, isn’t entirely dependent on famous names in voice acting; while the game Guardians still sound fairly similar to their movie counterparts, each voice performer grew into their role and embodied the characters quite nicely. There are some combat one-liners here and there to cringe at, but the banter in between combat and on the Milano ship is well-written and performed. It was nice to laugh at some genuinely funny moments, and these elements made the development of this group of “a-holes” into a real family unit all the more believable.

The story of Marvel’s Guardians of the Galaxy can feel episodic, with our protagonists delving deeper into a litany of unideal situations due to bad decisions and strange circumstances. It’s a lot to take in at once, and the pacing of the story can be as disorienting as the juggling you have to conduct in combat. Third-person combat, light RPG elements, dialogue choices, collectibles, and the occasional ship combat sequence made for an eclectic but sometimes bewildering gameplay experience.

It’s a messy game that sometimes feels like it moves too quickly, so quickly that dialogue overlaps and is often interrupted and never completed even when progressing at a fairly normal pace. I suppose one could excuse the game for being unrefined, much like the eponymous team that you are following and controlling. It could be a charming meta idea, but there should be higher expectations for any triple-A title for a blockbuster IP.

Despite its mechanical flaws, in depicting a story of flawed characters, it’s hard to pass up on Marvel’s Guardians of the Galaxy. This title feels free of franchise-building and shady business practices. While it tries to ape on your familiarity with the property, it somehow all stands on its own. The visuals, lovable characters, and the promise of hijinx in space are inviting, but within this off-beat exterior is a solid emotional core.