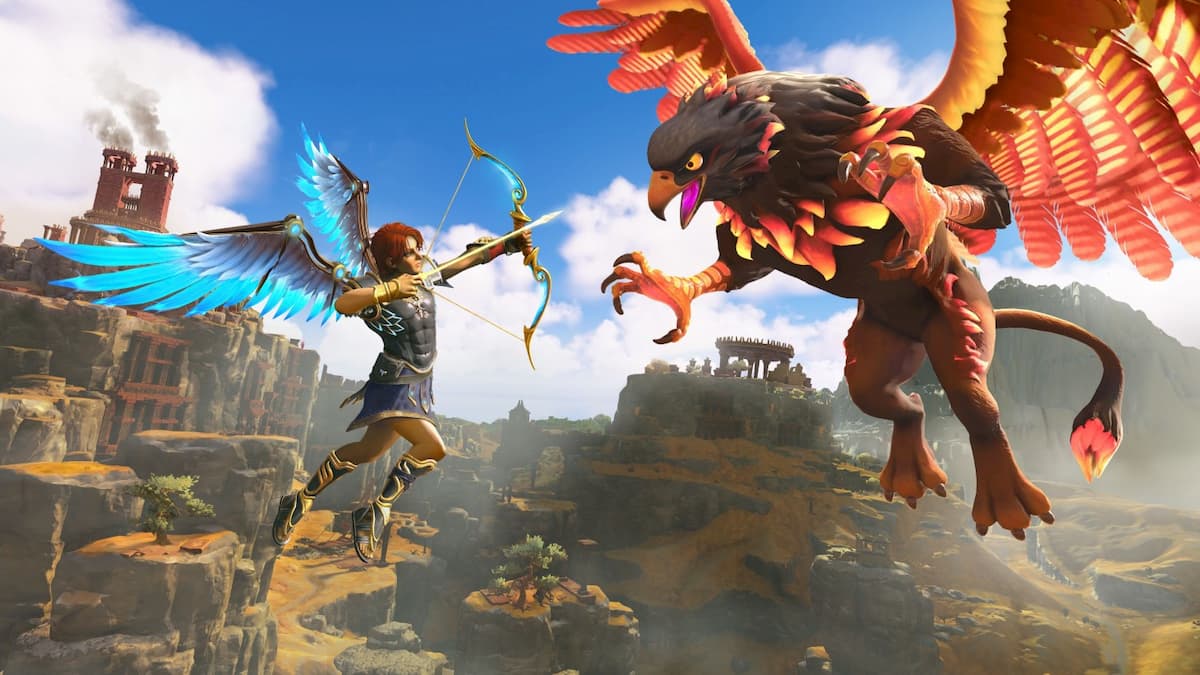 If you are somewhat wary of Immortals Fenyx Rising, I can understand why. It’s Ubisoft’s third large, open-world game this year, following Watch Dogs: Legion and Assassin’s Creed Valhalla. It is also the only one of those games that isn’t part of a large, successful, ongoing franchise.

Where Immortals Fenyx Rising marks a pretty large departure for Ubisoft is that it drops the dour trappings of reality and instead ventures into myth, drawing on ancient Greece and the shenanigans of a pantheon of gods and heroes to tell a heartwarming, and often very funny, tale.

Unlike many people, I have always enjoyed the collection marathons that are Ubisoft games, but I had a hard time hacking through the totally non-political stories of shadowy government organizations defending democracy, or shadowy government agencies infiltrating some caustic jungle. Maybe you prefer your shadowy agencies to be hackers or Assassins trapped in a centuries-long fight with Templars. One of the biggest selling points of Immortals Fenyx Rising is that someone decided to crack a window and let some light in. There are no shadows here, just a straight-up tale of human endeavor and belief in the face of the insurmountable.

The gods be damned

You play as Fenyx, the last possible hope for the gods of Greece. Typhon, a monstrous creature who was trapped in Tartaros by Zeus, has broken free. Unimaginably powerful, and catching a bunch of Gods who had grown somewhat lazy and disjointed unawares, he reduces them all to mere shadows of their former selves. Only Zeus remains, and he goes to Prometheus for help saving the world as they know it.

Zeus and Prometheus become the narrators of the story, explaining the rise of Fenyx as you play through the game, the perils you face, and the challenges you must overcome. Unfortunately, nobody except Prometheus expects much from Fenyx, because Prometheus always believed in the power of people. This is driven home by random conversations that you will overhear in the game, as people talk about your brother. He was on the way to becoming a great hero, the next of Greece’s legends, but now he is gone, lost in the devastation that Typhon unleashed and turned to stone like the rest of the mortals.

Only you remain, and it is up to you to overcome your obvious shortcomings, save and unite the gods, then take out Typhon.

Of all the things I didn’t expect from Immortals Fenyx Rising, I didn’t think it would make me laugh. The humor is solid, on-point, and occasionally insightful, but not overdone. A large part of this is Zeus and Prometheus, as they bicker back and forth about the history of Greece and the god’s impact on it. Zeus has a habit of inflating his own importance and abilities, while Prometheus is more interested in letting Zeus know that other gods are perhaps more suited to things that Zeus insists on doing.

Fenyx, despite being overwhelmed, is good-natured and high spirited. You can play as either a male or female character, and they will occasionally wish that their brother was there, seeing him as better suited to the complicated and challenging tasks at hand. At its heart, Immortals Fenyx Rising is about loss and overcoming the erosive effect it can have on us. While you are trying to return the gods to their former glory, you find that many of them would prefer to stay in their reduced state. The pain of loss is easier to live with than the fear of losing again, slightly less cutting than the sting of risking failure a second time.

It might sound like a small thing, but this allows what are potentially fairly standard quests for this type of game, where you complete tasks to get items to progress the story, to become more. The dialogue and narration enforce themes of growth, risk, and self-acceptance. Fenyx spends a lot of time just convincing each god that they need to step up to the task at hand while juggling her own fears and doubts, giving this cartoonish tale of myth and magic a universal message that feels honest and, in many ways, important.

Your normal attacks deal damage, while heavy attacks deal both damage and stun. Fill up an opponent’s stun bar and you win a free window of time in which to damage them. Enemy attacks can be dodged or parried, with some that simply cannot be parried thrown into the mix to keep you on your toes. These are telegraphed by red flashes, turning most fights into a battle that is reliant on timing. Parry a projectile just right and you can send it back at an enemy. Dodge a swipe at the very last second and you can slow time for a moment, getting in easy shots or repositioning if you feel the need.

On top of it all, your weapons and armor, which can be found hidden away throughout the game, provide different bonuses under different circumstances. Boss fights are fun, hectic affairs, and you can give yourself the edge by bringing the right kind of armor and weapon buffs in with you. This lends value to exploration, something that Immortals Fenyx Rising does a surprisingly good job of not forcing upon you.

Puzzles also form a huge part of the game. From the environmental puzzles that make up the vaults, to opening certain chests, solving Fresco challenges, and navigating some parts of the world, the game breaks up endless fighting with plenty of head-scratching. I feel the difficulty curve on these puzzles is well designed, introducing you to concepts but leaving you alone to figure out what you need to do in order to progress.

As you play, you can also grow stronger, unlocking new abilities, increasing your health and stamina, and improving upon your potions. Resource management is, once again, simple. There are four flowers in the game that can be used to make different potions that give different benefits. It never gets more complicated than that, and in every area of the game, you will be looking for the same things.

Immortals Fenyx Rising looks fantastic, and there is a fun meeting of graphical style and narrative as you realize you are playing through a story. I don’t mean a video game story, but rather the specific tale, embellishments and all, that Zeus and Prometheus are telling. Details can change on a whim if they decide, and when enemies are defeated they fly away into the sky, evaporating like forgotten figments of imagination.

There is also a huge amount of content to play in the game. All the story quests, the hidden quests, the secrets, puzzles, chests, and challenges provide hours and hours of content. I have spent about 40 hours with the game so far, and I am not even close to getting tired of the entertainment it provides.

Despite this glut of stuff to do, the game still respects your time. Armor and weapons are not upgraded one at a time, but instead, the entire inventory slot is upgraded. You put resources into upgrading the sword slot, which affects all your swords, not just one. You can adjust difficulty on the fly, so if things get too hard you can dial it back, or if you grow too powerful you can knock it up a notch.

Immortals Fenyx Rising is definitely a pleasant surprise, avoiding over complication where it isn’t needed, giving us a funny and heartfelt story, and providing endless hours of fun that don’t feel suffocating.