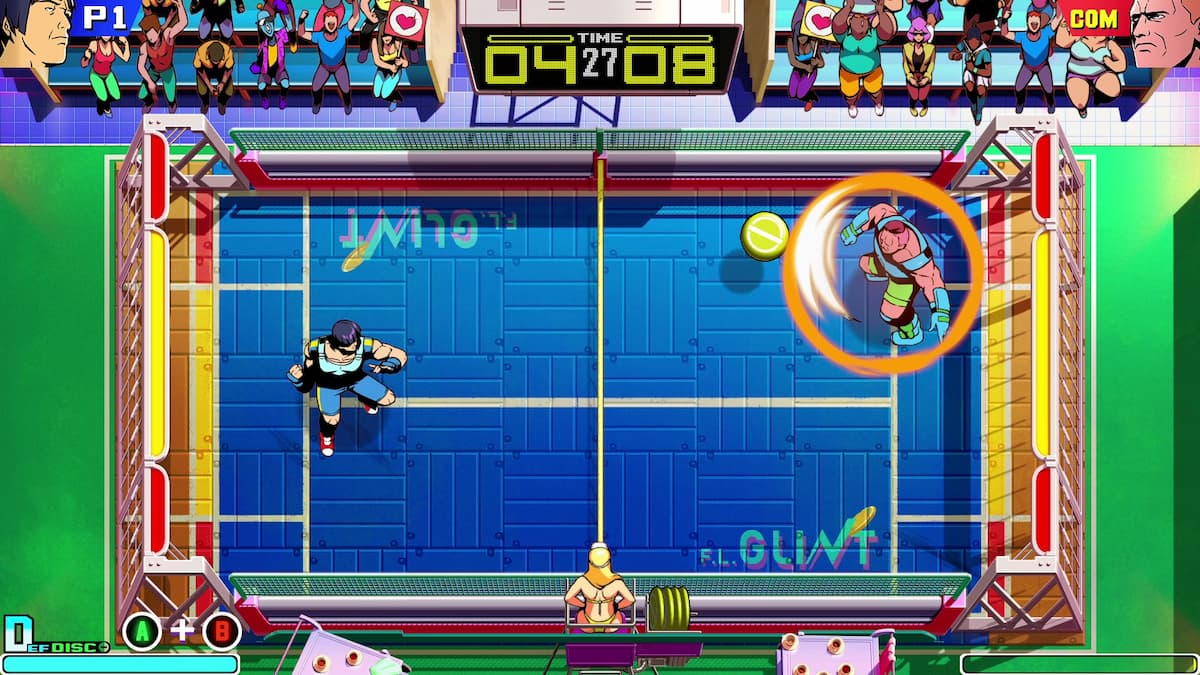 A common misconception with competitive video games is that they have to be somewhat overly complex and, to a degree, inaccessible. Whether it’s a shooter with layers of systems or fighting games with too many combos to memorize, some games appear too daunting for casual players, who then leave it to the “pros.” Windjammers 2 is a curious case — it’s inviting to all players with its easy concept, but becomes a steep rabbit hole of skill creep as you discover its ins and outs.

Windjammers isn’t some sort of blockbuster name, but it’s one that inspires an annoying amount of excitement to anyone who recognizes it. The high concept premise of Windjammers pits two players against each other, each defending a goal and trying to get a disc past their opponent. This disc bounces off walls and produces a crunchy twang and crash noise when it does so, making for memorable and satisfying gameplay. Nearly two decades after hitting the Neo Geo and arcades, Dotemu has revived the concept with a fresh coat of paint.

As opposed to the pixel art and sprites of the arcade games of old, Windjammers 2 looks remarkably similar to Dotemu’s previous retro revival Streets of Rage 4. The bold, hand-drawn style is a better fit for Windjammers, a game that is already glowing with personality. Characters have distinct traits and shapes, all reflective of their gameplay style.

Like its predecessor, Windjammers 2 is played from a top-down perspective, and each character has an emphasis on either “speed” or “power” on the court, possibly with a balance between the two. The basic controls involve tossing and catching the disc, with the option to lob it and the added ability to slapshot and deflect the disc. This adds an element of surprise to an already quick and snappy gameplay feel. Other mobility options include sliding and jumping, the former feeling more like the default movement option over simply running, and the latter allowing for drop shots and smashes.

You can still find enjoyment from permanently playing the game just with sliding, catching, and throwing, but Windjammers 2 may get a bit hairy against real players or even the basic AI, who utilize super moves. At its core, Windjammers is a sports game with the heart of a fighting game, and utilizing a charging super meter, players can hurl the disc at their opponents in flashy and completely unrealistic fashion. But it can be a process easy to trip over just to get these Power Tosses — you have to time a button press to launch the disc upward, all while standing over a crosshair to charge up, then utilize either a Super Spin that throws the disc in a looping pattern, or a unique Special Move that throws it with a character-specific pattern at a breakneck speed. This can lead to frustrating moments that bring otherwise fun sessions into a total halt.

The spectacle and ridiculousness of fast Windjammers gameplay is exhilarating to watch, but actually learning to get to that point can feel a bit uphill. For one, Windjammers 2 does not have a proper training mode, instead featuring a How to Play option in the menu that is nothing but a glorified slideshow. In order to fully get into the game, I had to find videos online or read material about the first Windjammers. Without being able to put these basic concepts into practice through guided tutorials or a freeform training space, players who are new or getting back into the groove of things such as myself will have to fend with facing off against the AI in Arcade or Versus mode.

While I appreciate the devotion to old-school arcade mindsets, this does lead to Windjammers 2 having a very barebones list of options. At the top is Online mode, emphasizing the competitive and player-versus-player nature of the game. Next is Arcade, a classic mode that has you battle a gauntlet of opponents with the occasional minigame in between. Lastly is Versus, which simply lets you play against another local player or a computer-controlled opponent. Besides missing training, there isn’t any gallery to show Arcade endings or add any additional context to these characters, nor is there a sound test. And for a long return to a cult classic title, one would hope that there would be additional modes to add some twists — but no dice.

There’s the argument that video games should “keep it simple, stupid,” but there seems to be an uneven distribution of that principle. It’s nice to be able to open a game and immediately get into the action, but there will come a point where Windjammers 2 doesn’t help you enough to truly siphon all that you can from it with its lack of proper tutorials and training mode.

Still, matches between two casual players can be immensely fulfilling, the same way friends playing a 2D fighting game against each other while only mashing buttons on their controller can be fun. And even with the basic bread and butter of Windjammers, more devoted players can improvise and throw some curves (quite literally) for very watchable and advanced competitive play. A great multiplayer game should be able to have something for both casual and hardcore audiences — while Windjammers 2 is a bit skewed to the experienced crowd, it’s still worth turning on to gawk at the sights and bob your head to the sounds of retro nostalgia.