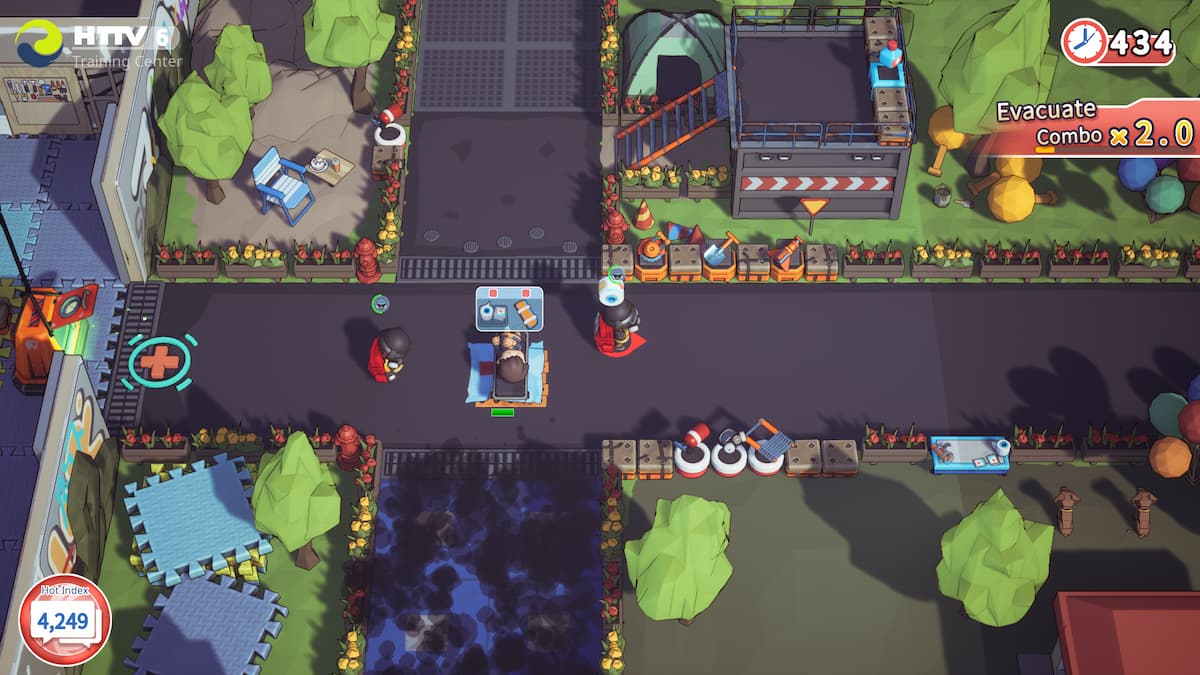 Party games are a great way to reconnect with friends, especially during — say it with me now — These Unprecedented Times of COVID-19. Mario Party, one of the original friendship destroyers, is now available to play online with friends. Loading up Prop Hunt (or one of its various clones) is a fantastic way to kill an afternoon with your buds. If you burned yourself out on Overcooked 2, you might be looking for a similar game to fill that void, and wondering if Rescue Party: Live! is worth it or not?

The basic premise of Rescue Party: Live! is working with your friends to save NPCs from the results of natural disasters, such as earthquakes, floods, and fires. Meanwhile, you’re viewing the events unfold through an internet stream of some kind, with messages from other viewers flashing past over the action on-screen (this is common in Japanese and Chinese livestreams, less so in Western streams.)

Usually you have to work together on a single NPC, for example, an NPC requiring a splint and bandages at the same time, which makes sense. However, the lack of item-highlighting can sometimes make it difficult to find where the items actually spawn in the game world — something made apparent in the tutorial, no less. Once fully healed, you carry the victim to the ambulance, another one gets wheeled out from the danger zone, and you repeat the process until time runs out.

I’ll be frank, I didn’t enjoy my time with Rescue Party: Live! I had a buddy sit down and play it with me, as well as trying Story Mode solo, and found that it lacked a lot of what made games like Overcooked! fun in the first place. While RP:L! does incorporate some of the features from Overcooked!, such as dynamic zones that change over time and moving platforms, it definitely felt hollow, like a simulacrum of something that could have been genuinely fun.

The world map is very static, the controls feel extremely stilted, and I’m not entirely sure the online works — I spent two hours in queue trying to find someone to play with. SteamCharts shows that at least ~120 people bought the game at the time of this writing, so I’m confused as to how I couldn’t find a single person to pair with.

In need of a rescue

There are some interesting puzzle ideas, such as fueling a helicopter platform to allow access to that area (and panda rescues, the bonus objective of the levels,) but the lack of visual clarity for items made tracking where each item spawns a huge chore. There’s also a lack of visual clarity for each player — a colored outline or something to highlight where the moving pieces are in the game would go a long way to fixing this issue.

The clarity issues extend to things like the main menu as well. There’s no immediate text that tells you what each option is — you have to move the cursor onto each icon to find out what the icon is for. The translation isn’t great, but not unreadable — just a little jarring and usually forcing a re-read. In some cases, such as the Achievements, even re-reads don’t really explain how to achieve an objective, such as “Get 3 stars in any forest region level without any Player miss.” What is a Player miss? Is that different from a Rescue fail?

Rescue Party: Live! is ten dollars on Steam, so it’s not breaking the bank. If you really, truly are out of options for party games, Rescue Party: Live! isn’t the worst choice I could think of. Or maybe you’ve got a group of friends who are all emergency personnel — they might enjoy throwing shovels at each other. However, Overcooked! 2 provides many more hours of more polished content for only 15 dollars more, just saying.